How Hoverboards Will Work 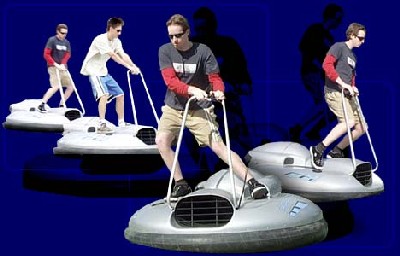 There's a great scene in the movie "Back to the Future: Part 2" where Marty McFly (Michael J. Fox) is being chased by a gang of hooligans on hoverboards. In the movie, these hoverboards look like flying skateboards that have some sort of magnetic propulsion system. They don't look like conventional hovercraft at all, but the hovercraft depicted in that movie served as an inspiration to Kevin Inkster, who has invented the world's first commercial hoverboard scooter, called the Airboard.

The Airboard will operate just like any other hovercraft, which is basically a vehicle that is supported and propelled by a cushion of air. Developers of the Airboard say it will initially be available at theme parks later this year, but you may have already seen it. If you watched the opening ceremonies of the 2000 Summer Olympics, Inkster showed off his space-age looking Airboard by riding it around the Olympic stadium.

In this edition of How Stuff WILL Work, we'll take a look at this new mode of transportation and see how the Airboard differs from traditional hovercraft.