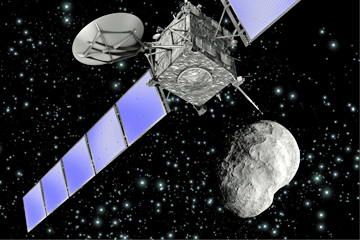 Artist's impression of Rosetta as it flew by asteroid Steins on Sept. 5, 2008
Image by C. Carreau, courtesy of ESA

Lurking in our solar system's remote hinterlands are two collections of icy bodies, the frozen remnants of our solar system's formative years. One, the Kuiper Belt, rings the sun just beyond Neptune's orbit. The other, the Oort cloud, surrounds local space somewhere between 5,000 and 100,000 astronomical units away from the sun (1 AU equals the average Earth-sun distance, roughly 93 million miles, or 150 million kilometers). When a frosty denizen of either frigid community departs to seek adventure in the inner solar system, we call it a comet.

The ancient Greeks mistrusted these "long-haired" hippy "stars" as erratic portents of ill fortune, but modern astronomers value comets for the glimpses they offer into the solar system's past. As frozen, primitive objects covered in volatile substances, they act as cold storage for the building blocks of our solar system. As repositories of the carbon, hydrogen, oxygen and nitrogen that make up nucleic and amino acids, they might also help explain how life arose on our planet [source: ESA].

Our knowledge of comets has taken off in recent decades, fueled by a succession of spacecraft flying to, rendezvousing with and even ramming the dirty ice balls [source: ESA]:

The closer we can get the better: A comet's brightness pales next to the brilliance of its starry background, so it defies easy observation from land-based or orbital observatories. It obligingly brightens from outgassing, jettisoning material as it swings sunward, but by then a surrounding cloud of gas and dust, or coma, obscures views of its nucleus.

With the International Rosetta Mission, we landed a spacecraft on comet 67P/Churyumov-Gerasimenko in November 2014 with plans to ride it around the sun.

The craft had to be as nimble as a shuttle pilot and nearly as self-sufficient as a crew of oil-drilling roughnecks, for its approach had to steer clear of whatever the comet threw off and its radio connection to mission control approached a 50-minute lag [source: ESA]. Now deployed, the duo of orbiter and lander will attempt to address some of the many unanswered questions surrounding comets and the formation of our solar system.

Getting There Is Half the Hair-pulling 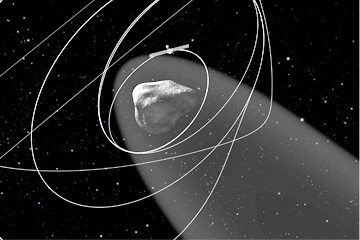 Catching a speeding comet, let alone landing on one, requires trick-shot billiards on an astronomical scale. Imagine whipping a ball bearing in a circle on the end of a string. Now picture trying to hit the bearing with another string and ball bearing. Now try this on for size: If that string measures 1 yard (0.9 meters) long, then the two ball bearings would measure a scale equivalent of 10 nanometers and 4 picometers, smaller than an antibody molecule and a hydrogen atom.

There's just one problem: We don't make spacecraft capable of doing this. Instead, Rosetta first launched into a parking orbit around Earth on an Ariane 5 rocket. Next it departed on a 10-year loop-the-loop mission through the solar system, borrowing speed from gravitational slingshots past Mars (in 2007) and Earth (in 2005, 2007, 2009). While traversing the main asteroid belt, Rosetta also made observations of asteroids 2867 Steins (Sept. 5, 2008) and 21 Lutetia (July 10, 2010) [sources: ESA; ESA; ESA; ESA].

Screaming along on a curving intercept course, the hibernating Rosetta awakened as it approached its rendezvous around 3.5 AU from the sun. Because it came in hot, it spent January to May 2014 periodically tapping its braking thrusters, ramping down to a relative speed of 6.6 feet per second (2 meters per second). By August, when it inserted itself into orbit, that velocity dropped further, to a few centimeters per second [sources: ESA; ESA].

Then, like a wedding photographer, the craft spent some time dodging around, snapping photos and looking for the best illumination conditions. European Space Agency mission control used these shots to calculate the comet's position, size, shape and rotation. Once in orbit, Rosetta mapped the comet and observed spin-axis orientation, angular velocity, major landmarks and other basic characteristics -- everything necessary for plotting five potential landing sites [sources: ESA; NASA].

In November, Rosetta released its lander from about 0.6 mile (1 kilometer) over the comet. Philae was slated to touch down at human walking speed, using its flexible legs to dampen its rebound and a harpoon to anchor it against the comet's low gravity, but the landing didn't go quite as planned. From there, it will ride the comet in and around the sun, carrying out observations as long as it can. The mission is scheduled to complete in December 2015 [sources: ESA; ESA; NASA].

In November 2014, Rosetta's Philae lander made the first controlled landing on a comet. Here are a few other cometary firsts:

When the Philae lander touched down, it became the first craft ever to make a controlled landing on a comet nucleus, but this is far from the only record it will set. Remarkably, it will be the first craft to venture beyond the main asteroid belt on solar power alone, despite the fact that, at 500 million miles (800 million kilometers), sunlight plunges to a scant 4 percent of Earth levels. The lander will also snap the first shots ever taken on a comet's surface, while Rosetta will become the first spacecraft to orbit a comet's nucleus, the first to fly wingman to an inbound comet and the first to witness its sun-induced changes up close [sources: ESA; ESA].

The orbiter hosts various gadgets planned to work in tandem with the lander's equipment. Ultraviolet and thermal-imaging spectrometers, along with a microwave instrument, will analyze the coma and help the lander study the comet's nucleus and coma-related outgassing. An onboard radio-wave sounder will also help Philae study the comet's internal structure. Rosetta will further analyze the coma's dust using an ion mass analyzer, a grain impact analyzer and dust accumulator, and a micro-imaging dust analysis system. Other instruments will study the comet's atmosphere, ionosphere and plasma environment, including temperature, velocity, gas flow density and magnetic field. Rosetta also sports a dual narrow-/wide-angle camera that sees in the visible, near infrared and near ultraviolet wavelengths.

The lander carries 10 experiments to observe, sample and analyze the comet's composition, supported by a drilling subsystem that can bore up to 9 inches (23 centimeters) and deliver material to onboard instruments. Among them is an alpha proton X-ray spectrometer, which distinguishes chemical elements by exposing a sample to a radioactive source and analyzing the energy spectra of bounced-back alpha particles, protons and X-rays [sources: ESA; NASA].

Philae also has a panoramic visible and infrared camera system, along with a landing imager. It will use a radio wave sounding system to map the comet's core structure and an electric sounding and acoustic monitoring system to gain a sense of the comet's mechanical and electrical characteristics. A multipurpose sensor will study surface and subsurface properties, and a magnetometer and plasma monitor will track the body's magnetic field and charged particle environment [sources: ESA].

It's a lot of equipment to fit into two small boxes, but decades of launching probes have taught ESA and NASA a thing or two about packing.

Scientists view asteroids and comets as close relatives. In fact, some asteroids -- the kind made of loose collections of dust -- might once have been comets. Astronomers also think that de-volatilized short-period comets from the Kuiper Belt can end up circling the sun as rocky masses. This hypothesis is best illustrated by Chiron, a massive, half-frozen asteroid, or centaur object, circling the sun just beyond Saturn's orbit.

To help shed light on these questions and others, Rosetta used its time flying through the main asteroid belt to study two poorly understood asteroids, 21 Lutetia and 2867 Steins.

Author's Note: How do you land a spaceship on a comet?

I've written in previous articles about the staggering complexity of launching a spacecraft to a specific planetary site or along a particular trajectory in space. Although we know -- or, at least, study -- the orbits of many objects, planets and moons, the distances and speeds involved are, well, astronomical, to say nothing of the gravitational tugs exerted by the various masses circling the sun.

As astonishing as such achievements are, often the hardest part of a space mission is not getting there, but rather surviving the trip. We tend to take it for granted that, assuming the launch goes well and no one confuses metric with English units, the craft will function. I guarantee you the scientists and engineers who design, build, (test, test, test) and launch these craft are not so sanguine about it. As the spotty-at-best track record of early planetary probes illustrates, engineering a craft to survive the rigors of space and hibernation for months, let alone a decade (!), still rates as one of the most extraordinary feats of engineering ever attempted -- and that's before you strap your meticulously assembled collection of instruments, control systems and propulsion onto one of those controlled explosions we call rockets.

10 Fastest Things in the Universe
Top 10 Moments in Space Bathroom History
Leonid Meteor Shower: What You Need to Know