How does the military intercept missiles? 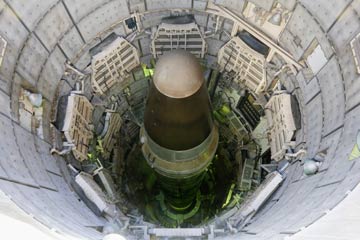 The dictatorial, paranoid regime of North Korea is known for issuing bellicose threats that it will annihilate its enemies, but in the spring of 2013, those admonitions started to seem shriller than usual. North Korea's government-controlled news media announced that dictator Kim Jong Un had ordered his military to put its missiles on standby for a possible strike against U.S. military bases in South Korea, Hawaii and Guam, and even the U.S. mainland. One North Korean newspaper proclaimed that San Diego, Austin and Washington, D.C. were potential targets [source: Cha].

Those might seem like big words, coming from a small, isolated country on the other side of the world. But in the U.S., officials didn't just brush it off as bluster. That's because they knew that the U.S. Defense Intelligence Agency (DIA), the Pentagon's own spy service, had just concluded with "moderate confidence" that the North Koreans actually had reached the level of technological sophistication needed to launch ballistic missiles armed with nuclear warheads. However, the missiles were thought to be less than reliable, and DIA believed they didn't yet have the ability to reach U.S. cities [source: Alexander].

Even so, the Pentagon subsequently warned in a report to Congress, North Korea was on the way to eventually being able to build an intercontinental ballistic missile (ICBM) capable of reaching the U.S. [source: Alexander]. And U.S. territory and bases in the Pacific—and its ally, South Korea — already were at risk.

But as the world watched anxiously, one important man was markedly calm. In testimony to the U.S. Senate, Adm. Sam Locklear, head of the U.S. Pacific Command, said that the U.S. was prepared to intercept North Korean missiles and prevent them from reaching their targets. "I believe we have a credible ability to defend the homeland, to defend Hawaii, defend Guam, to defend our forward-deployed forces and defend our allies," he said [source: Miklaszewski and Kube].

Locklear's seeming confidence was reassuring. Or was it? How exactly would the U.S. military intercept a nuclear missile aimed at Americans? And how dependable are the antimissile defenses, upon which the U.S. has spent $90 billion since 2002 [source: Masters and Bruno]?

The Quest to Stop Attacking Missiles 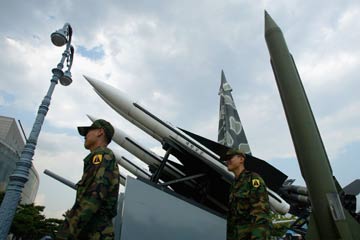 Antimissile defense actually is an idea that dates back to the Cold War. Even as the U.S. government adopted an official policy of massive retaliation to deter a Soviet attack, the Pentagon began trying to figure out how to stop enemy missiles before they could get to their targets. In 1962, the military began testing the Nike-Zeus anti-aircraft missile, which was designed to intercept an attacking ICBM in the upper atmosphere and blow it up with its own nuclear warhead, before it could reach a U.S. target. But the Nike-Zeus program eventually was abandoned, even though tests showed it was capable of knocking out an ICBM. Researchers realized that it would be easy for the Soviets to flood the skies with decoy missiles, as well as real ICBMs, and simply overwhelm defenses [source: Missile Defense Agency]. Decoy missiles are still a worry today and are not being addressed, argue critics [source: Union of Concerned Scientists].

In the early 1980s, the Joint Chiefs of Staff worried that the Soviet nuclear arsenal might be outgrowing that of the U.S. They convinced President Ronald Reagan to launch the Strategic Defense Initiative (SDI) [source: Missile Defense Agency]. Instead of nuclear-tipped interceptors, SDI relied upon exotic, yet-to-be-developed technology, such as space-based batteries of lasers that could direct killing beams at moving targets. Critics, who nicknamed it "Star Wars," derided SDI as costly and unworkable [sources: Encyclopaedia Britannica, U.S. Department of State].

With the collapse of the Soviet Union in 1991, there no longer was a need for a system designed to thwart a massive ICBM attack, and the focus of U.S. anti-missile research and development gradually shifted to stopping a smaller number of missiles from a rogue state such as North Korea or Iran. In the decades since SDI, thanks to advances in guidance and homing systems, the focus has shifted back to anti-missile missiles—non-nuclear "hit-to-kill" interceptors that would smash into an incoming warhead and destroy it, before it could reach its target.

In the early 2000s, the George W. Bush administration pulled out of a treaty that limited antimissile defenses and began building the Ground-based Midcourse Defense system, which put 30 interceptor missiles at two sites in Alaska and California. In 2009, the Obama administration announced that it would expand the U.S. Navy's Aegis system of ship-based missile interceptors, and in spring 2013 moved to add more land-based interceptors as well [source: Wright].

How Well Do Missile Defenses Work?

Today's potential threats to the U.S. are smaller countries such as Iran and North Korea that most likely have relatively few ICBMs, and lack the decoys and evasive navigation technology the Soviets had [source: Rosett]. On the other hand, their leaders are more belligerent, and there's also the danger that they could provide their nukes and missiles to non-state terrorists [source: Missile Defense Agency].

But whether you're trying to stop an intercontinental attack on the U.S. mainland or a short-range attack against a military base in South Korea, all missile warheads follow the same basic trajectory to their target. After being launched (the boost phase), they separate from the rocket booster and transition into a coasting midcourse phase in suborbital space, and then reenter the atmosphere in a terminal phase to descend upon their target [source: Rosett].

The initial boost phase might seem like the best time to knock down an enemy missile and warhead, because it's the time when the target is biggest and easiest to track. But it's difficult to get close enough to get a good shot. That's why U.S. missile defense focuses on the midcourse and terminal phases, even though warheads are a lot tougher to zero in upon [source: Rosett].

While ground-based interceptors in Alaska and California are poised to protect the U.S. mainland, its first line of missile defense is the Navy's Aegis ships, which are equipped with special radar and other systems to track enemy warheads, and powerful missiles capable of reaching them in suborbital space. Instead of trying to blow up the warheads, the U.S. defensive missiles are designed to collide with the warheads and smash them to bits -- a kinetic kill or "hit to kill" approach. Imagine a demolition derby in the sky, and you have the general idea [sources: Grier, Rosett].

Unlike the nuclear-tipped interceptors that the Pentagon envisioned a half-century ago, kinetic interceptors wouldn't actually detonate the warhead, only break it into pieces. That would eliminate the danger from nuclear fallout, though the pieces whizzing through space might become hazards for satellites and spacecraft [source: Global Security].

The big question is how well this would work. Critics of missile defense liken kinetic kill to hitting a bullet with a bullet, which makes it sound almost impossible to do [source: Rosett]. In tests, though, antimissile systems have done a bit better. Ground-based midcourse interceptors have managed to achieve a 50 percent kill rate, and ship-based Aegis systems nail dummy warheads about 80 percent of the time [source: Masters and Bruno]. But that's with careful preparation and advance notice; in a real attack, U.S. missile defenses might get 15 minutes' warning at best [source: Rosett]. And since even a single missile reaching its target would cause a catastrophe far bigger than 9/11, anything less than a 100 percent success rate wouldn't be good enough.

A 2012 National Research Council (NRC) panel of experts concluded that the present system, if it performs as designed, could handle the relatively crude missiles that North Korea currently may have but would have limited effectiveness against anything more sophisticated [source: NRC].

Author's Note: How Does the Military Intercept Missiles?

Back in the 1980s, like many people I was extremely skeptical of SDI—though I may have been biased, since I grew up watching movies such as "Fail Safe" and "Dr. Strangelove," which conditioned me to thinking of nuclear war as inevitably resulting in total horror. In the post-Cold War world, where a sudden, small-scale nuclear attack by an unstable regional power seems far more likely than an all-out Soviet attack, I've had to readjust my thinking. I still believe, however, that missile defenses serve best as a last resort, and that we should aggressively pursue other methods—from diplomacy to covert action--of preventing scenarios in which an attack might be launched.