How to Pilot a Starship 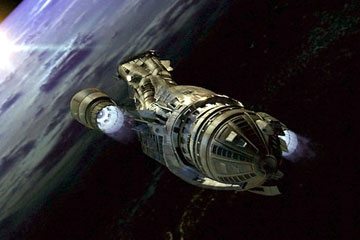 Used starships are easy to come by. You may have found yours floating derelict in the void or crashed on an alien world. Occasionally, you'll even dig one up in your own backyard or win one in a high-spirited game of Sabacc. Now that it's yours, what's it gonna take to fare some space in that ill-gotten jalopy?

Sure, some starships are a piece of cake. The Firefly-class transport ship featured in Joss Whedon's "Firefly" requires nothing more than a spunky crew and liberal flipping of three magic switches. The Gunstar in "The Last Starfighter" flies like a 1984 arcade game, so even kids can enjoy the fun of intergalactic war.

Sadly, it's not always so easy. Sophisticated starships often come with equally sophisticated piloting and navigation technology. It makes sense. These fictional vessels achieve feats beyond the grasp of even near-future space technology. They soar faster than the speed of light, slip through alternate dimensions and provide Earth-like gravity without so much as an offhand explanation.

Chances are, the starship in your garage wasn't designed with human beings or even humanoid aliens in mind. Before you just jump in and start pressing buttons, let's try out a few favorite piloting systems from science fiction, as well as a few rarities that might turn up. 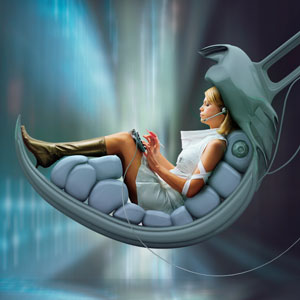 How do you drive this thing?
Coneyl Jay/Photographer's Choice/Getty Images

Alien spaceships present a whole host of problems. Fictional extraterrestrials range from tentacle horror shows to ephemeral energy beings, so there are no guarantees you'll even be able to climb aboard, much less take the ship for a test-drive.

Just consider your own ill-gotten starship. Does it lack a physical cockpit or breathable atmosphere? Is the pilot's seat made for square buttocks? If the ship designers were alien, don't expect a human-friendly layout.

Fortunately, a great many fictional aliens are morphologically similar to human beings. Many even appear to speak English! So, you might just be in luck. Jeff Goldblum and Will Smith had no problem commandeering an alien spaceship in "Independence Day," though other vessels such as the "Robotech" SDF-1 Macross required a decade's worth of research and retrofitting.

If you're lucky, the spaceship you score will host a benevolent robotic pilot to do all the work for you. The Trimaxian Drone Ship in "Flight of the Navigator" is a classic example of this. Sure, it might store star charts in your brain or ruin your life with time dilation, but that's all water under the bridge when it becomes your BFF.

Sometimes a ship's artificial intelligence (AI) will even manifest itself in a physical body, such as the demilitarized warship Xenophobe in Iain M. Banks' "Use of Weapons," which takes the form of an adorable catlike creature. When traveling aboard the Xenophobe, cuddling with said creature is highly encouraged.

Still, not every spaceship AI yearns for friendship. A bot like HAL 9000 from "2001: A Space Odyssey" might try to blow you out an airlock.

Other pilot AIs want to be much more -- "spaceships with benefits" if you will. Ship-piloting AIs in both "Futurama" and "Mass Effect 3" have fallen in love with their crew members, generally with problematic results. Sex with a spaceship may sound fun at first but don't give into the temptation. Stick to cuddles.

Drive It With Your Brain 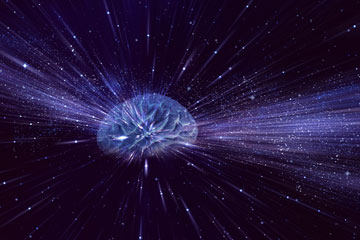 Still can't figure out how to pilot that ill-gotten starship? Well, the problem might just boil down to insufficient brainpower. See, some vessels require more than lightning-fast reflexes and a knack for sophisticated gadgetry. In order to drive a Guild heighliner -- and do so without crashing into a sun -- you'll need a mutated brain that can glimpse the future.

That's how the Spacing Guild in Frank Herbert's "Dune" avoids the many dangers of interstellar travel. The ability comes with a price, however, as it leaves them grotesquely addicted to the drug Melange, which gives the gift of precognition. A guild navigator essentially peers into the future enough to spot impending space travel disasters and slalom around them like flagpoles on a ski slope. With a ban on "thinking machines" in full effect, drug-infused precognizant mutants are pretty much the only way to navigate the "Dune" universe.

The pilots of Orson Scott Card's "The Worthing Saga" also benefit from psychic powers, using telepathy to outwit enemies during space battles. Imperial navigation in the "Warhammer 40K" universe would be impossible without the sacrifice of psychic astropaths.

Living, organic ships present their own unique piloting and navigation hurdles. The sentient Voidhawks of Peter F. Hamilton's "The Night's Dawn Trilogy" share a psychic bond with their human captains from birth. The Leviathan ships in "Farscape" depend on a similar arrangement, forming a symbiotic relationship with a special alien pilot species.

Even if you possess the necessary psychic powers, many of these vessels are huge commitments. Your pilot duties might mutate you into a giant tadpole or merely bury you inside the ship's belly for the rest of your life. Maybe you should start with a used X-wing instead?

Are Psychic Astronauts for Real?

A 1973 study compiled by the RAND Corporation for the U.S. Defense Advanced Research Projects Agency (DARPA) makes special mention of an alleged Soviet plan to launch psychics into orbit. The study cities an unverified report of a planned program to train cosmonauts to "foresee and to avoid accidents in space" via "precognitive process" [source: FOIA]. Take that for what it's worth. 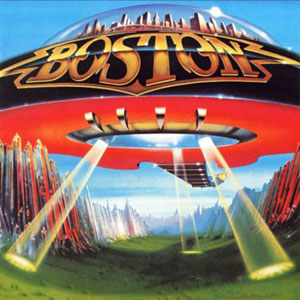 Think you have the psychically charged brain and versatile anatomy to pilot any starship that comes your way? Well, think again, because still other crafts get a bit eccentric with their user interface.

For instance, how ready do you think you are to pilot the starship Bistromath from Douglas Adams' "The Hitchhiker's Guide to the Galaxy"? The ship's bridge resembles a stereotypical Italian restaurant, complete with checkered tablecloth, robotic customers and robotic waiters.

The bistro décor is hardly for show, because the Bistromath's power and propulsion systems depend entirely on the social and mathematical interactions of group dining. You know the confusion that ensues when several people attempt to split the tab? That chaos serves as a sort of quantum state, in which "reality and unreality collide" and "anything is possible" [source: Adams]. In order to pilot the vessel, the captain sits at the table and orders different menu items to alter the ship's trajectory.

Some starships seem devoid of functional piloting or navigation systems at all -- such as the vampire mothership in "Lifeforce," which hitches a ride to Earth embedded in the head of Halley's Comet or the Space Hulks of "Warhammer 40K" that drift about randomly.

Meanwhile, classic rock legends Boston presumably pilot their iconic colony spaceship via the group's majestic power ballads. If you find yourself at the helm of such a starship, try playing a few riffs from "More Than a Feeling" to accelerate toward the speed of light, switching to B-sides to reduce speed.

As always, be aware that the presence of Bootsy Collins probably means you're aboard the P-Funk Mothership, the Apollo-esque UFO of Parliament Funkadelic. In this case, the ship's power and navigation depend almost entirely on that elusive quality known as "the funk." Also, possibly cocaine.

So best of luck flying your used starship through the inky-black void. And if all else fails, make Wesley Crusher do it.

I find the idea of musical spaceships particularly amusing, so it was a challenge to restrain myself from mentioning other ships from cosmic album covers as well. How does Electric Light Orchestra pilot the ship from its 1977 album "Out of the Blue?" Perhaps the answer is in the band's name?

And what of the naked lady spaceship on the cover of Crimson Glory's "Transcendence?" My theory is that it hinges on Einstein's theory of general relativity. Old Alby said, "Sit with a pretty girl for an hour, and it seems like a minute. THAT'S relativity." Crimson Glory simply employs sheer naked ladyness to warp space-time and convey ships across the galaxy. So piloting it would boil down to throwing her a bathrobe and collecting dropped towels.

Several folks helped me brainstorm ideas for this one, including HowStuffWorks' own Matt Frederick, game designer Andrew Greenberg, game designer Andy Harmon and, of course, the Stuff to Blow Your Mind Facebook fans. Some of the starships mentioned in this article are near and dear to my nerdly heart, but others were pleasant surprises.