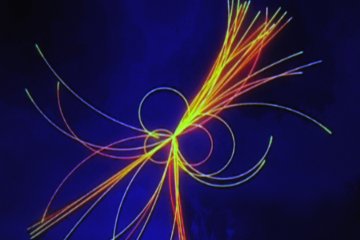 A graphic projected onto a screen shows traces of collision of particles, during the Large Hadron Collider Conference at Museo della Scienza e della Tecnica (Milan Museum of Science and Technology) on Dec. 20, 2011 in Milan, Italy.
Photo by Pier Marco Tacca/Getty Images

As anyone who has a junk drawer knows, keeping track of tiny bits of ephemera is difficult. You swear you had thumbtacks – they've got to be shoved in there somewhere, right? Along with the glue? Or are they in that big box of office supplies that also has a few random pieces of old television equipment, plus the clippers you use to shear the dog every summer? And, huh – all the pictures from your wedding are in that box as well. Maybe you'd keep better track of them if they were in the junk drawer? In they go.

Dealing with all that random mess might give you some sympathy for the physicists at the European Organization for Nuclear Research. (Which is shortened to CERN, in a confusing turn of events having to do with a French-to-English translation.) CERN scientists are the smart gals and guys who run the Large Hadron Collider – which we'll shorten to the much more practical LHC. The LHC is the big particle accelerator located deep under the Swiss countryside, where physicists confirmed the existence of the Higgs boson, a subatomic particle that led scientists to understand more about how matter gains mass in the universe.

The key word here being "subatomic." Saying that scientists at CERN are looking at things on a small scale is a vast understatement. Not only are they watching two protons – subatomic particles themselves – collide into each other, but they're also attempting to chart the subatomic debris that flies off when it happens. To the uninitiated, it might just look like a junk drawer of teeny, tiny, rapidly moving particles ... which, on top of being so small, decay almost faster than you can detect them.

Let's walk though that whole process of fling-fly-decay to get a sense of just what it is that scientists have to keep track of. At the LHC, protons race around a circular track at nearly the speed of light. And they aren't just ready to be zipped at a moment's notice. The scientists at CERN have to deliver a beam of protons into the LHC by streaming hydrogen gas into a duoplasmatron, which strips the electrons off the hydrogen atoms, leaving only protons [source: O'Luanaigh].

The protons enter LINAC 2, the first accelerator in the LHC. LINAC 2 is a linear accelerator, which uses electromagnetic fields to push and pull protons, causing them to speed up [source: CERN]. After going through that first acceleration, the protons are already traveling at 1/3 the speed of light.

Then they go into Proton Synchrotron Booster, which consists of four rings. Separate groups of protons race around each one – all the while being sped up with electrical pulses and steered with magnets. At this point, they're pacing at 91.6 percent of the speed of light, and each proton group is being jammed closer together.

Finally, they're flung out into the Proton Synchrotron – now in a more concentrated group [source: CERN]. In the Proton Synchrotron, protons circulate around the 2,060-foot (628-meter) ring at about 1.2 seconds a lap, and they reach over 99.9 percent of the speed of light [source: CERN]. It's at this point that they really can't get much faster; instead, the protons start increasing in mass and get heavier. They enter the superlatively-named Super Proton Synchrotron, a 4-mile (7-kilometer) ring, where they're accelerated even further (thus making them even heavier) so that they're ready to be shot into the beam pipes of the LHC.

There are two vacuum pipes in the LHC; one has the proton beam traveling one way, while the other has a beam racing the opposite way. However, on four sides of the 16.5-mile (27-kilometer) LHC, there's a detector chamber where beams can cross each other – and that's where the magic of particle collision happens. That, finally, is our drawer of subatomic clutter.

"Fun," you might be thinking. "That's a cool story about particle acceleration, bro. But how do physicists know where the particles are going in the accelerator? And how the heck are they able to keep track of the debris collision to study it?"

Magnets, yo. The answer is always magnets.

To be fair, it's actually only the answer to the first question. (We'll get to the second one in a second.) But really gigantic, cold magnets keep the particles from heading the wrong way. The magnets become superconducters when kept at a very low temperature – we're talking colder than outer space. With the superconducting magnets, a strong magnetic field is created that steers the particles around the LHC – and eventually, into each other [source: Izlar].

Which brings us to our next question. How do scientists keep track of the particles that result from the collision event? "Track" actually becomes a telling word in our explanation. As you can imagine, the physicists aren't just watching a big-screen television, flipping between a display of proton fireworks and reruns of "Star Trek." When they are observing proton races and collisions, scientists are mostly watching data. (Not Data.) The particles they're "keeping track" of after collisions are actually no more than tracks of data that they can analyze.

One of the detectors is actually called a tracking device, and it really does allow the physicists to "see" the path that the particles took after colliding. Of course, what they're seeing is graphical representation of the particle's track. As the particles move through the tracking device, electrical signals are recorded and then translated to a computer model. Calorimeter detectors also stop and absorb a particle to measure its energy, and radiation is also used to further measure its energy and mass, thus narrowing down a particular particle's identity.

Essentially, that's how scientists were able to track and catch particles during and after the process of acceleration and collision when the LHC did its most recent run. One issue, however, was that with so many collisions occurring per second – we're talking billions – not all of the protons smashing were actually all that interesting. Scientists needed to find a way to sort the useful collisions from the boring ones. That's where the detectors come in: They spot particles that look interesting, then run them through an algorithm to see if they deserve a closer look [source: Phoboo]. If they need closer examination, scientists get on that.

When the LHC is turned on again in 2015, there will be even more collisions than before (and twice the collision energy) [source: Charley]. When that happens, the system that triggers a "hey, look at this" flag to the physicists is going to boast an upgrade: More finely tuned selections will be made to advance past the first stage, and then all those events will be analyzed completely.

So, stay tuned to find out more about how physicists are tracking particles in the LHC; things can change around there at nearly light speed.

Author's Note: How do they keep track of the particles in the LHC?

Thank goodness protons – unlike the mice or rats of other scientific experiments – don't need to be fed and watered. Will billions of collisions a second, particle physics gets the prize for most data collected with least amount of cheese given as reward.

Denatured Alcohol: Great for Your Camp Stove, Not Your Margarita
How Magnets Work
Why Does Hydrogen Peroxide Come in a Brown Bottle?