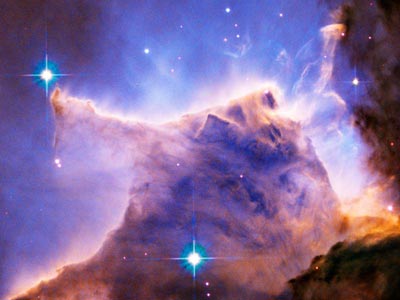 A picture of the Eagle Nebula, captured by Hubble's main camera, the WFPC2
Photo courtesy STScI and NASA

By looking at the different wavelengths, or the spectrum of light, of a celestial object, you can discern many of its properties. To do this, HST is equipped with several scientific instruments. Each instrument uses charge-coupled devices (CCDs) rather than photographic film to capture the light. The light detected by the CCDs are turned into digital signals, which are stored in onboard computers and relayed to Earth. The digital data are then transformed into amazing photos. Let's look at how each instrument contributes to those images.

­The Wide Field and Planetary Camera 2 (WFPC2) is Hubble's main "eye," or camera. It sees with the help of four CCD chips arranged in an "L" shape to catch the light -- three low-resolution, wide-field CCD chips, plus one high-resolution planetary camera CCD chip. All four chips are exposed simultaneously to the target, and the target image is centered on the desired CCD chip. This eye can see visible and ultraviolet light, and can take images through various filters to make natural color pictures, such as this well-known image of the Eagle nebula.

Often, interstellar gas and dust can block our vision of the visible light from various celestial objects. No problem: Hubble can see the infrared light, or heat, from the objects hidden in the dust and gas. To see this infrared light, HST has three sensitive cameras that make up the Near Infrared Camera and Multi-object Spectrometer (NICMOS).

Besides illuminating a celestial object, the light emanating from that object can also reveal what it's made of. The specific colors tell us what elements are present, and the intensity of each color tells us how much of that element is present. The Space Telescope Imaging Spectrograph (STIS) separates the incoming colors of light much as a prism makes a rainbow.

In addition to describing the chemical composition, the spectrum can convey the temperature, density and motion of a celestial object. If the object is moving, the chemical fingerprint may shift toward the blue end (moving toward us) or the red end (moving away from us) of the spectrum. Unfortunately, the STIS lost power in 2004 and has been inactive ever since.

Keep reading to find out what other scientific instruments Hubble has up its telescopic sleeve.