by Patrick J. Kiger Nov 5, 2015
Rat pups huddle together to stay warm in ways that can't be explained by the actions of any individual rat their collaborative behavior forms a superorganism. Lee Stocker/Getty Images

Imagine you're a young rat and it's getting cold outside. How do you stay warm? Since they don't make down-filled parkas in rodent sizes, your next best option is to huddle together with a bunch of other rat pups and move around. That way, you and your furry pals can use your bodies' metabolic heat to warm each other up.

That might all sound simple, but it's anything but, scientists say. They found that the little creatures coalesce to form what essentially is one, really big virtual rat, which uses individual movements in an intricate sort of dance. That uber-rodent adjusts to the outside temperature and keeps the group optimally comfortable – even as individual rats warm up and cool down again.

"Group behavior emerges even though the individuals are all obeying the same very simple rules."
–Professor Stuart Wilson

Within the huddle, the pups continually rotate, with warm rats moving from the interior of the scrum to the periphery, which in turn gives chilly rats on the periphery a chance to move inside and get warm again.

Researchers from Great Britain's University of Sheffield have even created a computer model of the rats' complex huddling behavior. In a recently published article in PLOS Computational Biology, they report that "individuals together behave as a single organism that continually adapts its exposed surface area to regulate its temperature in a way that no individual can."

Such superorganisms, as they're called, are also formed by a wide range of creatures, from soldier ants and bees to penguins, according to Stuart Wilson, a lecturer in cognitive neuroscience at the University of Sheffield, and one of the co-authors of the rat study. In an email, he notes that many species of fish often move together in large schools, but split up and re-form when threatened to confuse predators.

"What seems to link the other examples together with rodent huddling," he says, "is that the group behavior emerges even though the individual birds, fish, or mammals, are all obeying the same very simple rules."

With a rat pup, the simple behavior that starts the superorganism is the urge to turn toward a source of warmth when it's cold, and move away whenever it feels too hot. The result, though, is pretty amazing. When it gets colder, the young rats begin huddling, with the size of the group dictated by the external temperature – the lower it is, the bigger the group.

"It's all about how much of the body surface area, i.e., the skin, is exposed," says Wilson. "Being part of a larger group when it is cold means that the individual is less exposed and therefore stays warm." Conversely, as the pups feel warmer, they split into smaller groups, and eventually separate altogether if the temperature rises enough.

The huddling behavior has parallels to similar behavior in insects. Honey bees actually work together to do the opposite of the young rats, cooling down the community by pressing their bodies against the inner surfaces of the hive. That process mimics the way that humans' cardiovascular systems help to regulate body temperature by removing internal heat.

Exactly how all these creatures know to do these things – whether it's learned or innate behavior – is still not clear. Researchers would love to find the explanation, because it may help roboticists design and build future generations of autonomous machines that can band together to perform complex tasks too complicated for one individual robot to perform.

University of California-Davis psychologist Jeffrey Schank, who edited the Sheffield researchers' paper, thinks that the rats' tendency to huddle could be a characteristic selected by evolution. "A mother rat needs to leave the nest and forage," he explains in an email. "Group thermoregulation allows the mother to leave the nest without the pups becoming too cold or losing too much energy, which would be a fitness benefit."

Now That's Cool
Some scientists, such as physicist and futurist Michio Kaku, believe that humans eventually may link their brain waves electronically in "brain-nets," creating artificial superorganisms that would enable people to share emotions, memories and sensations, and possibly solve common problems too complex for any one person.

The Rise of Crazy Koozie Technology 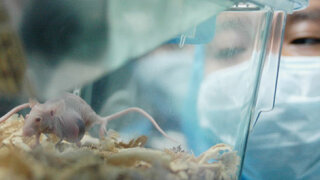 In the Lair of the Rat King 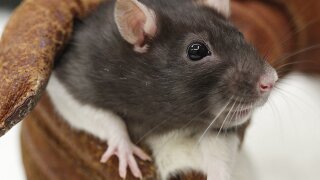