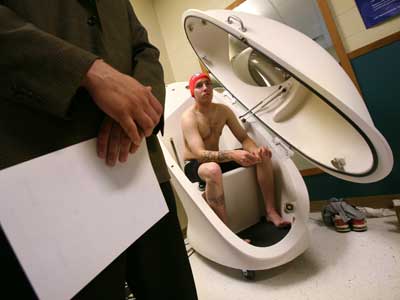 ­P­aying human test subjects is a reality many view as unavoidable. While ­afflicted individuals­ might line up for the possible benefits of Phase III testing, Phase I testing tends to require healthy specimens. Like it or not, most of these individuals aren't going to volunteer without financial compensation.

This dilemma has existed for more than a century. In 1903, a New York physician stirred up ethical debate when he offered $5,000 to any man or woman willing to cut an ear off for his studies. Is it ethical to purchase a slice of another individual's health, even with the greater good in mind? Despite all the cozy accoutrements and oversight, paid test subjects put their health and even their lives on the line in sometimes painful or degrading clinical trials. After all, Phase I tests exist to help identify harmful side effects. If your bottle of medication says that it might result in bowel control problems or suicidal thoughts, you can bet that someone received a paycheck for experiencing them at some point.

Plus, there's the concern that the resulting guinea pig lifestyle winds up appealing to a particular segment of the general population. In some cases, the individuals are professional test subjects, moving from one to another like a jobless Phish fan trailing a never-ending tour. In other cases, the test ranks are occupied by some of the very underprivileged classes preyed upon in less ethical times: the poor, the mentally handicapped and even undocumented immigrants.

Contract research organizations have also come under fire for their oversight and staffing. University institutional review boards placed more emphasis on curtailing overzealous academics, in addition to testing ethics. For-profit review boards, however, answer to the market's need for speed, which has resulted in overlooked ethical concerns such as unsafe testing environments and unlicensed medical staff members. The FDA on the other hand largely places more emphasis on data inspections and reportedly inspects only 1 percent of clinical trials [source: Elliot].

Meanwhile, headlines continue to document the role of human embryonic stem cells in experimentation. While these highly versatile cells may play a huge role in the development of cures for various diseases and even ageing, many oppose the destruction of human embryos to get them.

In one form or another, human experimentation is as old as human curiosity. We learned that fire burned beca­use we tested ­it. As scientific research continues, the challenge is to keep the fla­mes in check.

­Explore the links below to learn even more about scientific experimentation. ­