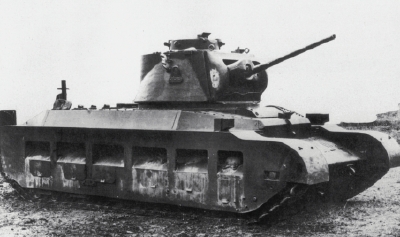 The A12E1, the prototype of the Matilda II Heavy Infantry Tank Mark II. The Matilda II was much more heavily armored than the Matilda I, its predecessor. See more tank pictures.
©2007 Publications International, Ltd.

The Infantry Tank Mark II A-12 marked a breakthrough in British thinking about tanks. And it came just in time for World War II.

When the "war to end all wars" came to an end in 1918, the British people slowly woke to the fact that an entire generation of young Britons had been destroyed and their nation nearly bankrupted by four long years of war.

Until the first air-raid warnings over England in September 1939, a deeply held spirit of pacifism possessed the nation, even as Adolf Hitler's strident voice and demonic visions drove the German people to rearm.

Because the British did not, or would not, appreciate the threat rising in central Europe, they were ill-prepared to fight a new war.

When Nazi Germany invaded Poland on September 1, 1939, Britain had only a handful of modern ground and air weapons and not even enough rifles to equip an army that needed to be expanded rapidly.

Fortunately, the so-called "Phony War" (a period during the winter of 1939 to 1940 in which very little fighting occurred) on the western front provided nine months for British industries to catch up.

Still, when Hitler marched into Norway in April 1940 and Belgium, the Netherlands, and France the following month, the British Army could field only the 1st Army Tank Brigade, which consisted of the 4th and 7th Battalions of the Royal Tank Brigade.

These two battalions had fewer than 160 tanks capable of meeting Nazi German tanks on equal terms. Seven other tank regiments already in France with the British Expeditionary Force were equipped with light tanks armed only with machine guns.

The First Armored Division was still training in England. Only the 7th Battalion was equipped with a heavier tank; it had 23 Mark II Infantry Tanks out of a total of 50 tanks. (These Mark tanks should not be confused with Marks I through VIII of World War I.)

The Mark I Infantry Tank, nicknamed the Matilda, was designed in 1934. One specification for the Mark I was that it cost less than £6,000. This was only met by using many such existing components as a Ford V-8 engine, which was barely suitable, and a suspension system designed for an earlier tank that weighed half as much.

The Mark I was armed with a single .30 caliber machine gun, which was later up-gunned to .50 caliber.

The Spanish Civil War (1936-1939) showed how ineffective a slow-moving, lightly gunned, and lightly armored tank could be. In Germany, Russia, Japan, Italy, and, to a lesser extent, the United States, design work was pushed hard to develop a heavier, faster tank. The Mark II Infantry Tank, called the Matilda II, was Britain's improvement.

Trials on the new tank design had been completed by 1938 when rearmament began in earnest. Difficulties in obtaining the large castings for the turret and front armor plate, or glacis, delayed production.

Thus, when the war began in September 1939, only two Infantry Tank Mark II A-12s had been completed.

To learn more about the Infantry Tank Mark II A-12, continue to the next page. 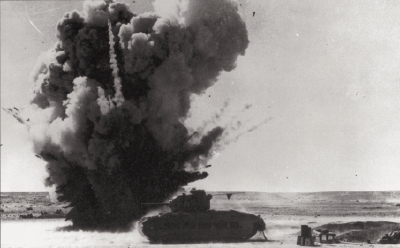 The Infantry Tank Mark II A-12 (Matilda II) was a vast improvement over the original.

The machine gun was replaced by a two-pounder (40mm) gun. Armor thickness was increased to 3 inches and speed from eight to 15 miles per hour through the installation of two diesel engines.

The one-man turret was retained because the tank's narrow body did not allow a wider turret.

The Mark II's armor was proof against the 20mm guns of the Panzerkampfwagen IIs and the Nazi German 37mm antitank guns.

Unfortunately, Rommel was able to order up 88mm and 105mm antiaircraft and artillery guns, and the British attack, which was unsupported, was turned back.

The clash helped convince Adolf Hitler that his Panzer units were dangerously exposed, and he ordered them to halt short of the coast of the English Channel at Dunkirk. The British thus had enough time to build deep defenses that endured until most of the British Expeditionary Force had been evacuated from the beaches.

Improved versions of the Infantry Tank Mark II A-12 were built. Notable were the Mark IV, which was given a better engine, and the Mark V, which had an upgraded transmission. Modified for desert warfare, they served well in the seesaw North African battles from 1940 to 1943.

Perhaps the most famous of all the British armored units, the 7th Royal Tank Regiment was sent to join the Western Desert Force in September 1940. Italian tanks were no match for the more heavily armored and gunned Mark IIs, and the Italians were forced back across Cyrenaica (modern Libya).

In 1941 the 7th Royal Tank Regiment's old opponent, Erwin Rommel, arrived in North Africa to take charge of the Axis forces. In June 1941 the 7th and the 4th regiments were combined to form the Fourth Armored Brigade. The Mark II's lack of firepower now began to tell.

The 7th Royal Tank Regiment lost its last Mark IIs during the gallant defense of Tobruk in 1942.

The Infantry Tank Mark II A-12 served throughout the Mediterranean with British forces, with Soviet tankers on the eastern front, and in the Far East. But it was not fast enough nor heavily enough gunned and armored to survive after 1943.

The Mark II marked a turning point in British thinking. The concept of the tank as only an infantry support weapon or reconnaissance tool slowly changed to that of a weapon capable of taking on and defeating enemy armor before creating and exploiting breakthroughs.

To learn about Infantry Tank Mark II A-12 specifications, see our final section. 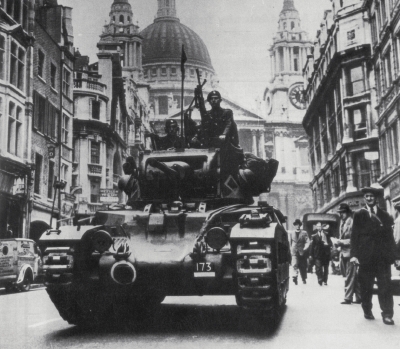 A Matilda II Infantry Tank Mark II A-12 parades down Ludgate Hill and past St. Paul's Cathedral in London at the start of World War II.
©2007 Publications International, Ltd.

The Infantry Tank Mark II A-12 was an improvement over the Mark I in terms of both equipment and design. Find specifications for Britain's Matilda II below.

Does the U.S. Military Maintain Secret Underwater Bases?
Does the U.S. military have rules about tattoos?
How Military Video Conferencing Works