Why is it clearer to view space through an infrared telescope? 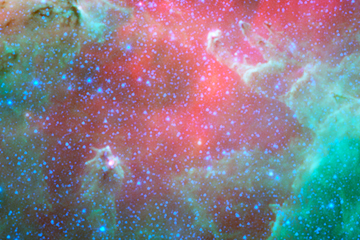 Infrared telescopes allow us to see things that aren't on the visible spectrum.
Universal History Archive/UIG via Getty Images

If you've been following the progress of the James Webb Space Telescope (set for a 2018 launch), you might've heard it described as an improvement on the Hubble Space Telescope. Unlike old lame Hubble, which is barely able to see anything, JWST is going to completely dominate space imaging with its ability to discern every tiny detail through its amazing infrared capability. You might've heard.

Or maybe you didn't hear that at all, because it's not really true. Here's the reality: The Hubble was (and still is) able to give us awesome images using both visible and ultraviolet light. And while much has been made of Webb's infrared superiority, Hubble isn't chopped liver: It also has infrared capabilities. They are just a bit different.

While the differences between orbiting telescopes are a bit complicated, we should be clear that space telescopes in general are going to provide us with a sharper picture than terrestrial ones. Terrestrial telescopes have trouble seeing through atmospheric turbulence, and -- most importantly to our subject today -- they also have the crummy luck of having to look through the Earth's atmosphere, which absorbs a lot of the UV and infrared light that space is giving off [source: Melina].

As opposed to those land-based scopes, Hubble is able to capture images in the near-infrared spectrum, which is really cool. You're seeing cooler red stars and red giants, and you're certainly able to see things that you couldn't see on a visible spectrum [source: IPAC]. Webb will also have near-infrared capabilities, but it will one-up Hubble with its ability to look in the mid-infrared region. All of a sudden, we're able to see all sorts of things we couldn't spot before. Warm dust. Comets. Planets! Obviously, seeing more stuff is better than seeing less. More infrared lets you see more clearly. Case closed.

Not quite. Remember that seeing in infrared is essentially looking at heat. That means that Hubble, looking in the ultraviolet, visible or even near-infrared range, can actually see some things that Webb won't be able to distinguish, like cold dust or gases.

Imagine looking at a closed paper bag. You've got yourself a paper bag there. But if you're able to look at it in infrared light, you would no longer see the paper bag, but rather a cat who is pretty ticked at being chosen to illustrate my clever analogy. Now, it's not that you can see the picture more clearly with infrared, because you can't see the bag. On the other hand, in visible light, you can only see the bag.

The thing is, it isn't necessarily "clearer" to see in infrared; it just lets us see different things. We're looking at light emitted in different wavelengths, depending on the object. For the complete picture, we need to see it all.

Learn more about telescopes and the universe in "Guidebook to the Constellations: Telescopic Sights, Tales, and Myths (The Patrick Moore Practical Astronomy Series)" by Phil Simpson. HowStuffWorks picks related titles based on books we think you'll like. Should you choose to buy one, we'll receive a portion of the sale.