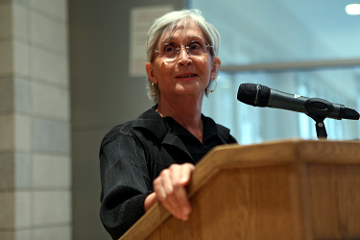 Choreographer Twyla Tharp, seen here after receiving the I.A.L. Diamond Award for Achievement for the Arts at Columbia University in 2010, received a grant from the MacArthur Foundation in 1992.
Roger Kisby/Getty Images

You may not have heard of the MacArthur Fellowships, although the name MacArthur "Genius" Grants may ring a bell. The MacArthur Fellowships were created in 1981 through the John D. and Catherine T. MacArthur Foundation. The $500,000 grants are given annually to 20 to 30 Americans who are deemed to be intelligent, creative, driven and doing important work. While the money, meted out over a five-year period, is a gift -- there are no reporting requirements or documentation necessary -- the hope is that the grants will relieve any financial constraints the individuals have, allowing them to continue to pursue their fields of study and innovation. The fellowships aren't rewards for past achievements, then, but instead are intended to be investments in the future -- everyone's future [source: MacArthur Foundation].

The MacArthur Foundation was founded by John MacArthur in 1970. MacArthur was a successful businessman, namely in insurance; at the time of his death, he was sole owner of Chicago's Bankers Life & Casualty Company, then the nation's largest privately-held life insurance company, and was one of the three richest men in America. Catherine, his second wife, held various roles in her husband's businesses [sources: MacArthur Foundation, MacArthur Foundation]. The foundation began operating after MacArthur's death in 1978. Dedicated to supporting people and institutions who want to create a better, more peaceful world, it doles out substantial amounts of cash and loans through four programs, one of which is the Fellows Program [source: MacArthur Foundation].

It was MacArthur's son, J. Roderick MacArthur, who came up with the idea for the fellowships after listening to a member of the foundation's board of directors discussing an article by a Dr. George Burch. In the article, Burch said creative people interested in research and innovation should be given money to live on so they're free to sit around and think. Intrigued by this notion, J. Roderick created the MacArthur Fellows Program. Over time, the awards were dubbed "genius grants," but the foundation doesn't like this nickname because of its emphasis on intellect. While smarts are certainly important, recipients possess many other qualities, such as persistence and risk-taking [source: MacArthur Foundation].