From Lab to Kitchen 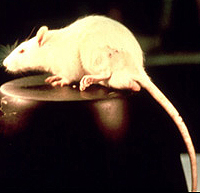 The Delaney Clause in the Food Additives Amendment of 1958 states that no food additive can be considered safe if it is found to induce cancer when ingested by humans or animals. This is tested by feeding large dosages of the additive (in this case artificial sweeteners) to small numbers of rats and mice.

Large dosages are used to compensate for the fact that a relatively small number of animals are used -- perhaps a few hundred. The large dosages also compensate for the possibility that rodents may be less sensitive to the chemical than people might be. Although it may seem that only a large dose of any chemical can cause cancer, small doses can too -- just less often.

Companies that want to market a new sweetener (or any food additive) must petition the FDA for approval, unless the new sweetener is made up of components generally recognized as safe (GRAS). The FDA usually requires strong evidence, including animal studies, to show that the sweetener will not cause harmful effects if humans consume unexpected quantities of it. Companies may also submit studies of the additive's affect on humans.

When deciding whether an additive should be approved, the FDA considers its composition and properties. For instance, does the sweetener break down into harmful by-products? What is the amount likely to be consumed, and what are the probable long-term effects? Because they can't determine absolute safety, the FDA has to decide if the sweetener is safe based on the best scientific knowledge available.

If a sweetener is approved, the FDA determines the types of foods in which it can be used, the maximum amounts to be used, and how it should be identified on food labels. It is then said to be GRAS. They FDA continually monitors consumption as well as any new research on the sweetener's safety to assure that its use continues to be within safe limits.

The Adverse Reaction Monitoring System (ARMS) serves as an ongoing safety check for all food additives. The system monitors and investigates all complaints that are believed to be related to specific food additives. If reported adverse reactions represent a real public health hazard, the FDA will take action.

Next, we'll take an in-depth look at some artificial sweeteners, starting with saccharin.

There are four legal categories under the 1958 Food Additives Amendment to the Federal Food, Drug, and Cosmetic Act (FD&C Act) for substances added to foods: