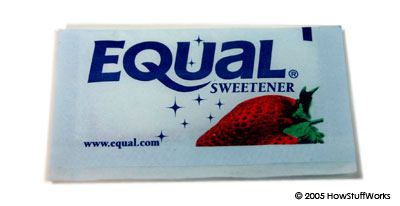 Aspartame (sold under the brand names Equal®, NutraSweet®, and NatraTaste®) is derived from a combination of two amino acids: aspartic acid and phenylalanine. It was discovered in 1965 by chemist Jim Schlatter of the pharmaceutical company G. D. Searle & Co. (now a part of Pfizer). Schlatter licked his finger to pick up a piece of paper while testing a new anti-ulcer drug.

Aspartame is 180 to 200 times sweeter than sugar, so only very tiny amounts are necessary to sweeten a food or beverage. When digested, aspartame breaks down into three components: aspartic acid, phenylalanine, and methanol (wood alcohol).

People with the rare genetic disorder phenylketonuria (PKU) should avoid aspartame because their bodies are deficient in the enzyme that breaks down phenylalanine. If they consume foods or beverages containing significant amounts of phenylalanine, it can build up in their bodies and can cause mental impairment and possibly brain damage. Newborns are routinely checked for PKU.

Because aspartame breaks down in heat, it is not generally used in baked or heated foods. According to the official aspartame Web site, it can be found in "more than 6,000 products including carbonated soft drinks, powdered soft drinks, chewing gum, confections, gelatins, dessert mixes, puddings and fillings, frozen desserts, yogurt, tabletop sweeteners, and some pharmaceuticals such as vitamins and sugar-free cough drops." Aspartame was approved as a food additive by the FDA in 1981.

There appears to be more controversy over the safety of aspartame than any other artificial sweetener. Since its approval, 75 percent of all complaints reported to ARMS have been about aspartame. Only about one percent of people who experience a problem actually report it [ref].

While no officially recognized studies have shown problems with aspartame, many consumer groups and individuals are speaking out against it. Aspartame is blamed for a number of health problems, including headaches, seizures, chronic fatigue syndrome, memory loss, and dizziness. It has also been associated with an increase in multiple sclerosis, Alzheimer's disease, and cancer.

Critics of aspartame claim that although aspartame's two amino acids are a natural part of our diets, when they are consumed normally in food they appear with many other amino acids that cancel out any negative affects. When these amino acids are on their own, as they are in aspartame, the concern is that they enter the central nervous system in abnormally high concentrations.

A similar problem allegedly occurs with the methanol (wood alcohol) that aspartame breaks down into when digested. When it occurs naturally in fruit juices and alcoholic beverages, methanol is always accompanied by higher amounts of ethanol, which acts as an antidote for methanol toxicity. Ten percent of aspartame is absorbed into the bloodstream as methanol. The Environmental Protection Agency set a recommended limit of only 7.8 milligrams per day of methanol, while a one-liter aspartame-sweetened beverage contains about 56 milligrams, or eight times the recommended amount.

On the other hand, many groups have also performed studies that show aspartame is safe and causes no health problems.

is similar to aspartame in that it is derived combination of aspartic acid and phenylalanine. is more stable, however, because the bond between the amino acids is harder to break down. It was developed over 20 years and is 8,000 times sweeter than sugar. According to the neotame Web site, only six milligrams are needed to sweeten a 12-ounce beverage.

Because neotame doesn't break down into phenylalanine like aspartame does, it is safe for people with PKU. Products containing neotame will also be able to be cooked or baked.

was approved by the FDA in 2002 for use in beverages, frozen deserts, yogurt, ice cream, chewing gum, candy, baked goods, toppings, fruit spreads, breakfast cereals and more. Because it's still new, there aren't many products that use neotame yet.