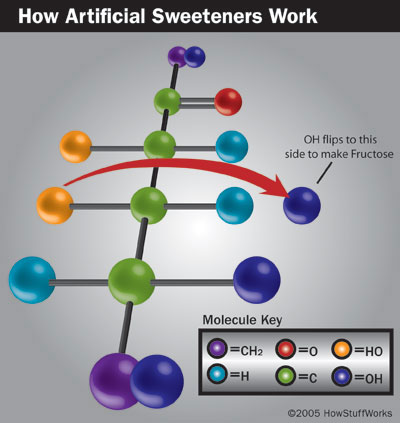 Tagatose (or Natrulose®) is a new artificial sweetener manufactured from lactulose, or milk sugar. In one step, lactose is hydrolyzed (broken down into smaller molecules by using water) to glucose and galactose. In the second step, galactose is isomerized (changed to a molecule with the same chemical formula but a different atom arrangement) to D-tagatose by adding calcium hydroxide.

Tagatose was discovered when Gilbert Levin, founder of Spherix, wanted to find a new sweetener and thought a "left-handed" sugar might be the answer. In chemistry, a molecule can be chiral ("left-handed" or "right-handed") if it cannot be superimposed on its mirror image. For example, our hands are mirror images of one another and cannot be superimposed. Levin was accidentally sent D-tagatose, a "right-handed" molecule that structurally similar to L-fructose. It turned out to be just what he was looking for.

Tagatose has about 1.5 calories per gram, and does not significantly impact blood glucose or insulin levels. It can't be digested, so it passes through the body unabsorbed. It is equal in bulk and sweetness to sugar and can be combined with other artificial sweeteners to improve flavor and texture. The FDA accepted a Generally Recognized As Safe (GRAS) declaration submitted by the manufacturer of tagatose in 2001.

Because it's so new, tagatose is not used in many products yet. Currently it is used in Diet Pepsi Slurpees®sold at 7-Eleven®, and Florida Gold®'s new Light and Tangy frozen juice beverage concentrate. It can be used in breakfast cereals, diet soft drinks, health bars, frozen yogurt/nonfat ice cream, soft confectionaries, hard confectionaries, frosting, and chewing gum.

Again, the newness of tagatose means that there isn't much controversy about it yet. It isn't absorbed well and can cause GI distress if consumed in large quantities.

Dihydrochalcones (DHCs) are noncaloric sweeteners derived from bioflavonoids of citrus fruits, and glycyrrhizin is a noncaloric extract of licorice root, 50 to 100 times sweeter than sugar. Both of these sweeteners are already approved for use as flavors and flavor enhancers.

Alitame (brand name Aclame®), is reported to be 2,000 times sweeter than sugar. A petition for its use has been filed with the FDA.