Why Does Beer Get Skunky? 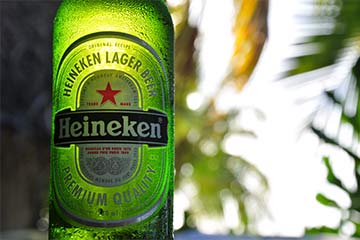 Leaving a bottle of beer out in the sunlight will turn its contents.
wallix/iStock Editorial/Thinkstock

There's only one thing that could make your weekend better, and you know exactly where to find it. As you crack open the door of the local beer store, the very thing you are seeking presents itself: a six-pack of your favorite ale, stacked atop its companions right in front of the store's window. Sunlight streams in, lingering over this man-made mountain of green bottles, making your next move an easy one. You grab a carton by the handle and clink it on the counter. Beer run, complete.

Once you get home, there's only one problem. You twist off the top, take a long-awaited swig and realize it tastes awful. Reminiscent of rotten cabbage with a scent of skunk that curls its way from the back of your throat through your nasal cavity, hammering into the tiny spaces of your consciousness reserved for the most noxious of stimuli -- your boyfriend after burrito night, fresh dog poo on the sole of your shoe, that steak tartar you threw away three days before the trash man cometh.

Your beer is skunky, emitting an aroma and taste that was never part of the brewer's plan. Something went wrong between the time the beer was bottled and the time it was opened. Most likely, light is to blame.

Remember that tempting display of beer in front of the store window, bathing in the ultraviolet light? A veritable recipe for skunky beer. Even brightly, artificially lit commercial coolers can spell disaster, as can the bottle itself. Clear, light-brown, blue and green bottles allow light to interact with -- and turn -- their contents in a matter of seconds. Even dark brown bottles can, over time, let in too much light. When this happens, the bitter, light-sensitive compounds in hops known as isohumulones break down and bind with the beer's sulfur compounds.

The result of this chemical reaction is a byproduct called 3-methyl-2-butene-1-thiol (MBT), which is chemically similar to the stinky spray of an actual skunk. It's so off-putting that tasters have been known to detect MBT in minute amounts -- as low as one-billionth of a gram in a 12-ounce (354-milliliter) beer. Sometimes beer plagued by MBT is commonly called "light-struck" beer [source: Solis].

However, some beers are brewed to taste skunky. Using particular strains of lager yeast and brewing conditions, some brewers are shooting for this distinctive, sulfur-infused result. A German-style Pilsner is a good example of this. It's good to know the difference between a beer that's been skunked by accident and one that considers the pungency part of its flavor profile [source: Beer Advocate].

And, for good measure, take a few precautions. If you are after a non-skunked beer, buy it in a keg or can. If you do prefer bottles, don't buy them from a brightly lit cooler or a sunlit display. And by all means, when you get the brew home, keep it out of sunlight [source: Harbison].

10 Scientists Who Were Their Own Guinea Pigs
Could you grow meat from stem cells?
How Aerosol Cans Work