Could you grow meat from stem cells? 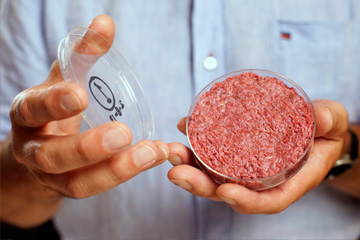 Before we get into the actual logistics of whether we can grow meat from stem cells, perhaps we should first address the larger question: Why would we want to? Cows, after all, are literally bred for meat. We have whole industries set up around the ease of making our pets into patties. (Too harsh?)

The setup has a few problems. For instance, while cows are bred for meat, that doesn't mean they're efficient at providing nutrition. For every 100 grams of food they need, we get 15 grams of protein from them [source: Jha]. And then there's the business of the industry, which accounts for 5 percent of carbon dioxide and a whopping 40 percent of methane emissions [source: Jha]. So our "raise enough cows, feed enough people" plan has its limitations.

That's where lab-grown meat could come in. And before we get any further, let's just get it out there: Meat can, in fact, be grown from stem cells. But it's not as easy as putting a whole bunch of cells in a petri dish and watching them multiply.

In fact, there's more than one way to grow a burger from stem cells. The first method was introduced in 2013. Researchers took 20,000 cells from a cow's shoulder and let them mature in calf serum [source: Adams]. (Calf serum: the grossest, saddest serum?) They stimulated the cells to exercise themselves so they'd stay firm and mimic the texture of a real burger [source: Adams]. (The write-up is curiously silent on the details of a cell workout.)

But this first method grew only a few pieces of meat; you couldn't populate a fast food franchise with that, let alone a whole chain. So in 2014, researchers put some stem cells through a slightly different process. While the cells initially hang out to mature, they're then transferred to a bioreactor. The bioreactor can make the stem cells grow into much larger batches, as binder proteins are added. In fact, it can make up to 56,400 pounds of meat a year [source: Diep].

So it's an emphatic yes: Stem cells can be used to make meat, and there's even a couple different ways to get the sausage (or, um, hamburger) made.