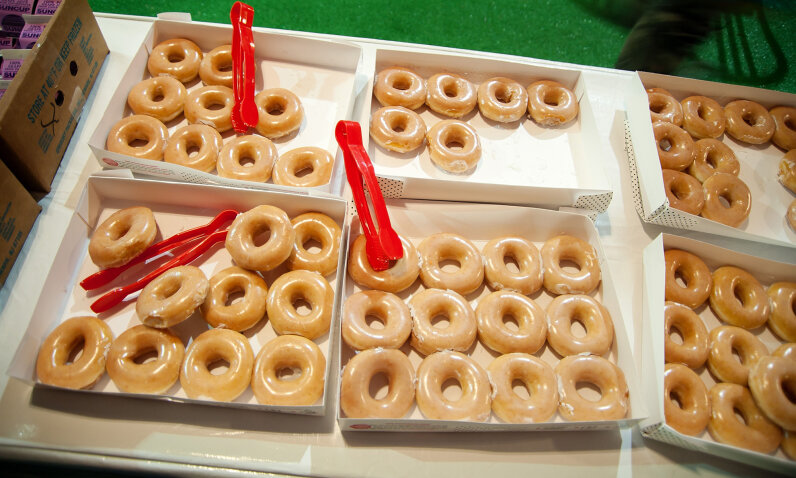 In the Southern United States, sweets fans have been scarfing down Krispy Kreme doughnuts for more than 50 years -- in many families, they're a weekly ritual! The rest of the country finally got a taste in the '90s, when Krispy Kreme launched new doughnut stores coast to coast, to much fanfare. The company's unique snacks have also crept into pop culture over the past few years, appearing in several TV shows and in dozens of national magazines. On top of that, Krispy Kreme has been making headlines in the financial world -- it was one of the best performing initial public offering stocks in 2000.

All this, as well as some grumbling stomachs, seemed like a good excuse to stop by our local Krispy Kreme for a peek behind the scenes. In this article, we'll see how the Raleigh, N.C., "factory store" transforms raw ingredients into Krispy Kreme's signature doughnut, the "original glazed." We'll also see how the store's doughnut-makers get chocolate filling in the middle of doughnuts, and find out a little bit about Krispy Kreme's distribution structure.

A batch of original glazed starts with Krispy Kreme doughnut mix, water and yeast, the same single-cell fungi used to make bread rise. The yeast is what makes the original glazed so light -- it puffs the dough up with air, so it's not dense like a cake doughnut (more on this later).

The bakers mix the ingredients to form a dough, which they pour into a hopper. The hopper feeds into an extruder, the device that forms the dough rings that eventually become doughnuts. The extruder machine uses pressurized air to force dough through a ring-shaped cutter -- a cylindrical cutter around another round cutter. Since the cutter forms doughnuts in the shape of a ring, there is never really a cut-out hole in Krispy Kreme doughnuts.

The proprietary extruder machine was the one piece of equipment that Krispy Kreme wouldn't let us photograph. The extruder and the specific dough recipe are guarded trade secrets.

The extruder deposits the ring-shaped dough directly onto a rack conveyer belt that takes the doughnut to its next stop, the proof box.

The proof box, or proofer, is a tall glass case that houses a doughnut conveyer belt. The conveyer belt carries doughnut trays slowly up and down in a zig-zag motion all the way through the proof box.

The purpose of the proof box is to surround the doughnuts with heat and humidity. Humidity and low heat make the yeast organisms more active without killing them. When the yeast becomes active, it eats sugar and releases carbon dioxide gas as a waste product. The carbon dioxide expands, creating air pockets all through the dough (see How Bread Works for more information).

In order to heat the doughnuts to just the right temperature, the proof box machine has to keep the heat and humidity at very specific levels for a certain amount of time. If it gets too hot or humid, the machine opens up vents in the side of the proofer to let some air out. Krispy Kreme doesn't publicize the exact proofer settings, as they're part of the secret recipe. The dough spends 15 to 20 minutes in the proof box.

As the conveyer belt carries the dough through the proof box, the yeast transforms the dough from a thin ring to a full size, puffed-up doughnut. When the doughnut has fully expanded, it's ready to be cooked.

The first step after the proofer is to cook the dough. Like most doughnuts, Krispy Kremes are fried (cooked in oil). Frying cooks the dough rapidly from the outside in to give the doughnuts their distinctive crispy texture.

The conveyer belt carries the doughnuts through a vegetable oil bath heated to between 355 and 360 degrees Fahrenheit (about 180 C). The doughnuts actually float in the bath as they're pushed along by the bars connected to the belt. Since the doughnuts are floating, the bath only cooks one side at a time. After the first side cooks, the doughnuts pass over a rotating arm that lifts them up and tips them over.

The bakers have to fry the doughnuts for a very specific amount of time in order to ensure the right taste and texture. At several points during the day, the manager will actually time and check the process to make sure the doughnuts are cooking just right. The doughnuts have to be cooked to 85 to 87 degrees Fahrenheit (about 30 C), which takes about 45 seconds for each side.

The final step for doughnuts sold in the store is glazing. The glaze is a mixture of sugar, milk and other ingredients. Bakers prepare the glaze in a large mixing container and then pump it out to the glazing waterfall reservoir.

Another pump draws glaze up from the reservoir to the top of the waterfall, where it falls down over the doughnuts on the conveyer belt. As each doughnut passes through the waterfall, it's completely coated in glaze.

When the machine's running, walk-in customers can get the cream of the crop, hot doughnuts fresh from the glazing machine. The rest of the doughnuts, marked for delivery, stay on the conveyer belt. The belt takes them up a ramp and all the way around the factory room.

Cooling
The long, slow ride (it lasts about 40 minutes) gives the doughnuts plenty of time to cool before they're packed in boxes and on trays for delivery. This is an important step in the process -- packing hot doughnuts immediately would simply be too messy.

After the cooling tunnel, the doughnuts are ready to go. Packers load them in boxes and on trays, and then stack them onto carts.

When it's time to run the route, employees roll the carts onto the delivery trucks. At the Raleigh factory store, the delivery drivers run 14 different routes, serving about 26 merchants each.

From a preparation standpoint, the coolest varieties are the filled doughnuts. To make a filled doughnut, the bakers start with the same dough used to make original glazed, but they attach a different cutter to the extruder to form a round blob of dough rather than a ring. The dough goes through the proof box and the cooking oil and may or may not pass under the glazing waterfall, depending on the particular variety. Then it gets to the filling station, where bakers inject cream, custard or one of the various fruit fillings.

At the filling station, the bakers pour filling material, prepared in the Winston Salem manufacturing facility, into the tank on a pumping machine. The machine has two nozzles and a long button that pumps filling from the tank. To fill a doughnut, the bakers slide it onto one of the nozzles and push the pump button while pulling the doughnut toward them. The pump is designed to inject the doughnut with exactly the right amount of filling.

To make cake doughnuts, the Krispy Kreme bakers mix up a different sort of batter, wheel the proof box away from the conveyer belt and hook up a different type of extruding machine. To make different shapes (bumpy crullers, for example), the bakers attach different shaped cutters to the extruder. The shaped batter goes straight to the cooking oil since it doesn't need to rise.

The really amazing thing about Krispy Kreme factory stores is how many doughnuts they churn out, even with a pretty small staff. The Raleigh store can make 440 dozen doughnuts an hour, and the largest stores can make twice that. Visiting the store, you're also struck by just how much is involved in the process. The factory line is an amazing combination of machinery and manpower, all in the service of a good doughnut.

For more information about Krispy Kreme and doughnut-making in general, check out the links on the next page.