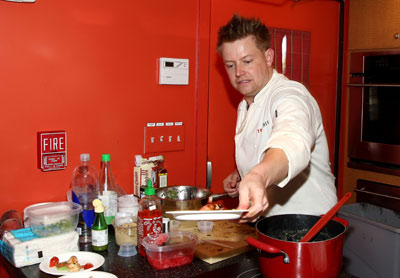 ­Molecular gastro­nomy is a rela­tively new term, one that has caused much confusion and controversy. Some of the confusion comes from trying to put a modern spin on a m­uch-older word. That word is gastronomy, which, since the 19th century, has described the art of selecting, preparing, serving and enjoying fine food. If preparing food is an art form, then it must be an activity requiring creative skill and imagination, not technical expertise. And yet gastronomy, like astronomy and agronomy, say, seems to describe a rigorous, scientific field of study.

In 1989, Nicholas Kurti and Hervé This decided to intentionally emphasize the scientific elements of cooking by coining the term molecular and physical gastronomy. The addition of the words "molecular" and "physical" cast cooking in a new light. It was no longer magic and artistry, but molecules obeying well-known processes that describe the behavior of all solids, liquids and gases. Suddenly, the "art" of selecting, preparing, serving and enjoying fine food became the "science" of doing so.

This described molecular and physical gastronomy as the physics and chemistry behind the preparation of a dish, and he began testing the scientific validity of cooking rules and old wives' tales in a research environment that was part kitchen, part high-tech lab. He also organized the first International Workshop on Molecular and Physical Gastronomy in 1992 and presented the first doctorate in molecular and physical gastronomy at the University of Paris in 1996.

Not everyone embraced the field. Some critics complained that the new field overemphasized the scientific processes of cooking and failed to acknowledge intangible aspects of the craft, such as a chef's intuition or spontaneity. Others simply said it was too difficult and complex for average cooks in average kitchens. One such critic has been William Sitwell, the editor of Waitrose Food Illustrated. Sitwell argues that the modern interpretation of gastronomy lies beyond the grasp of most food lovers and home cooks. Even Heston Blumenthal, who applies the science of cooking to great success, has questioned the accuracy of the term.

­In 1998, after Nicholas Kurti passed away, Hervé This officially changed the name of the fledgling field from molecular and physical gastronomy to just molecular gastronomy. He also began to ease his strictly scientific definition of the field. Today, This acknowledges that cooking involves more than just science and technology. It also involves art and love -- components that aren't so easily described by the behavior of atoms and molecules. In this new framework, molecular gastronomy is more properly defined as the "art and science" of selecting, preparing, serving and enjoying food. Others prefer a more fanciful definition, such as the science of deliciousness, which suggests that perception and emotion are just as important in cooking as physics and chemistry.

­The emotional side of cooking may be difficult to quantify, but the science is becoming better understood every day. We'll begin to explore some of the science next.

It's Not Food Science