Do people really use radiators to make stills? 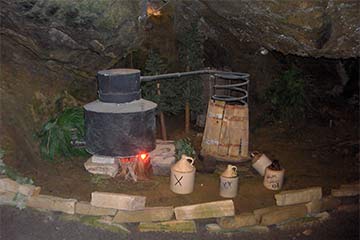 Homemade whiskey still operations may occasionally use radiators, but not often.
Andrea Abrogast/Flckr

Moonshine and fast cars: The two go together like ham and beans, right? As it turns out, the connection runs deeper than most of us realize.

Throughout history, moonshine stills have been made using automotive radiators as one of their essential working parts. Although there are a number of still design variations, even the simplest rig requires a condenser -- and that's where the radiator comes into play.

The condenser (in this case, the radiator) is connected to both ends of the still with copper tubes, which are situated right between the heated pot of fermenting liquid and the receiving pot into which the moonshine will eventually flow. As the fermented mixture begins to boil, it creates steam. This heated steam exits the boiling chamber through the copper tube and goes into the top of the condenser, which has been submerged in a vat of water. The water helps cool the steam as it moves from the top of the condenser to the bottom. When its journey is complete, it will exit the condenser through a copper tube and flow into a receiving pot. Voila! Mash into moonshine [source: Colston].

It may seem like a reasonable idea to repurpose a radiator into a still condenser. After all, a radiator was designed to work as a watertight vessel, and it can withstand the stresses of liquids going through frequent temperature fluctuations. In addition, a radiator -- particularly a large truck radiator -- is good for high volume distillation.

Unfortunately, using a radiator as part of a still is bad for a number of other reasons. Alcohol is a solvent. Running alcohol through a radiator will cause lead to leach from the radiator -- not only from the metal itself, but also from the soldered welds used to hold the radiator together. This can create lead-tainted moonshine, a dangerous cocktail that is nearly impossible to detect, but which can result in lead poisoning. Although extreme cases end in death, lead poisoning almost always includes symptoms of high blood pressure, abdominal and joint pain, memory loss, muscle ache, headache and mood disorders [source: Mayo Clinic].

And it's not a thing of the past, either. It's easy to imagine radiator-rigged stills in the wild and wooly 1940s, but the truth is, they are still found today. The use of vehicle radiators in moonshine production has led to outbreaks of lead poisoning, including one as recently as the 1990s. This incident occurred in several rural Alabama counties, when a cluster of lead poisoning cases led to the discovery of illicit stills contaminated with lead. All of the patients who presented with lead poisoning reported drinking moonshine, some as little as 0.2 liters (6.75 ounces) per day, and required hospitalization. One person died [source: CDC]. In 2013, a TV news crew showed a rusty car radiator being used to make moonshine in rural Alabama.

It's also important to note that most radiators contain antifreeze residue that can end up in the distilled alcohol too. Antifreeze residue contains ethylene glycol, a sweet-tasting poison that's nearly indistinguishable in moonshine [source: Dillow].

Author's Note: Do people really use radiators to make stills?

What fun is drinking a little hooch if you have to go and get lead poisoning? One of the issues with illicit alcohol is that it's a risk -- not only in the producing, selling and buying of it, but in the drinking of it too. From blindness to the lingering effects of lead, it will make you think twice before supping from a mason jar you bought out of a trunk on the side of the road.