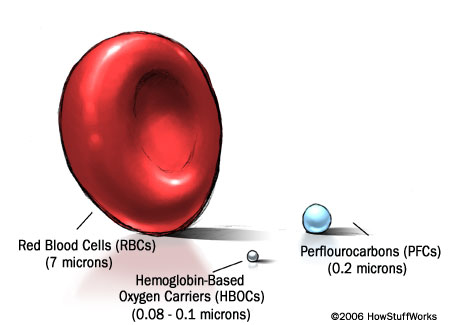 Both HBOCs and PFCs are considerably smaller than red blood cells.

Until recently, most attempts to create artificial blood failed. In the 19th century, doctors unsuccessfully gave patients animal blood, milk, oils and other liquids intravenously. Even after the discovery of human blood types in 1901, doctors kept looking for blood substitutes. World Wars I and II and the discoveries of hepatitis and the human immunodeficiency virus (HIV) also raised interest in its development.

Pharmaceutical companies developed a few varieties of artificial blood in the 1980s and 1990s, but many abandoned their research after heart attacks, strokes and deaths in human trials. Some early formulas also caused capillaries to collapse and blood pressure to skyrocket. However, additional research has led to several specific blood substitutes in two classes -- hemoglobin-based oxygen carriers (HBOCs) and perflourocarbons (PFCs). Some of these substitutes are nearing the end of their testing phase and may be available to hospitals soon. Others are already in use. For example, an HBOC called Hemopure is currently used in hospitals in South Africa, where the spread of HIV has threatened the blood supply. A PFC-based oxygen carrier called Oxygent is in the late stages of human trials in Europe and North America.

See the next page to learn more about HBOC blood.