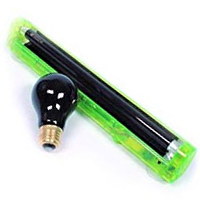 ­You have­ probably seen black lights at amusement parks, science museums and Halloween displays. Black lights may look just like normal fluorescent lamps or incandescent light bulbs, but they do something completely different. Switch one on, and white clothes, teeth and various other things glow in the dark.

­For example, if you have a fluorescent poster and shine a black light on it in a dark room, the poster will glow brightly. You may have also seen pieces of paper that look blank in regular light but spell out a glowing message under a black light. Many amusement parks­ use hand stamps that are invisible until you view them under black light.

In this article, we'll find out exactly what's going on here. We'll also see why black lights make some objects glow but not others, and we'll look at some interesting black light applications.

What Is "Black Light"?

If you turn on a black light bulb in a dark room, what you can see from the bulb is a purplish glow. What you cannot see is the ultraviolet light that the bulb is also producing.

Our eyes can see visible light in a spectrum ranging from red through orange, yellow, green, blue and violet. Above violet is ultraviolet light, which we cannot see. How Sunburns and Sun Tans Work discusses ultraviolet light and its effects on our skin. A black light bulb produces UVA light (as opposed to UVB light, which is much more harmful).

Ultraviolet light frequencies are above violet on the spectrum and are invisible to the human eye.

What you see glowing under a black light, whether on a fluorescent poster or an invisible hand stamp or a newly washed white T-shirt, are phosphors.

A phosphor is any substance that emits visible light in response to some sort of radiation. A phosphor converts the energy in the UV radiation from a black light into visible light.

In the next section, we'll see how phosphors are used in regular fluorescent lighting and in black lights.

Why Is My Shirt Glowing? 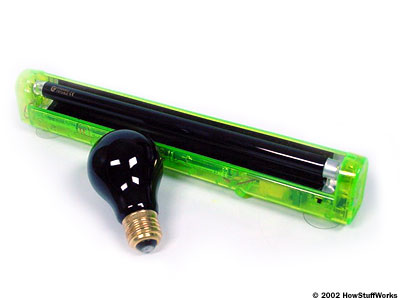 Black lights come in both tube and bulb form.

The conventional black light design is just a fluorescent lamp with a couple of important modifications. Fluorescent lamps generate light by passing electricity through a tube filled with inert gas and a small amount of mercury. (See How Fluorescent Lamps Work for more information.)

When energized, mercury atoms emit energy in the form of light photons. They emit some visible light photons, but mostly they emit photons in the ultraviolet (UV) wavelength range. Because UV light waves are invisible to the human eye, fluorescent lamps have to convert this energy into visible light. They do this with a phosphor coating around the outside of the tube.

Phosphors are substances that give off light -- or fluoresce -- when they are exposed to light. When a photon hits a phosphor atom, one of the phosphor's electrons jumps to a higher energy level, causing the atom to vibrate and create heat. When the electron falls back to its normal level, it releases energy in the form of another photon. This photon has less energy than the original photon, because some energy was lost as heat. In a fluorescent lamp, the emitted light is in the visible spectrum -- the phosphor gives off white light we can see.

Black lights work on this same principle. There are actually two different types of black light, but they work in basically the same way.

In the next section, we'll see what kinds of objects contain phosphors, and we'll look at some interesting uses for black lights. 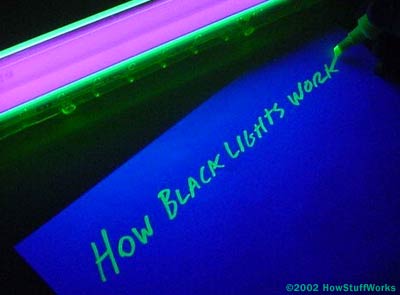 In addition to making people and fluorescent posters look cool, black lights have some practical applications. For example:

Most of these uses, as well as dozens of others, follow a common theme -- the black lights make the invisible visible or isolate one specific substance from everything around it. When you think about it, there are dozens of situations where you could put this phenomenon to work. The applications are potentially endless!

For more information on black lights and other sorts of light energy, check out the links on the next page.