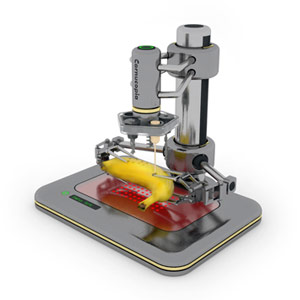 The Robotic Chef can apply a variety of cooking techniques to food items that already exist, such as a piece of fruit or a steak.
Photo courtesy Fluid Interfaces Group, MIT Media Lab

Coelho and Zoran developed the concept of digital gastronomy with three autonomous mechanical devices, which together make up the Cornucopia. The sleek external design of the Cornucopia is just as advanced as its internal technology. Each component resembles its name.

Adorning the surface of the Digital Fabricator, or food printer, you'll see a variety of colored canisters that store and properly cool all of your favorite food components. So far, its inventors don't know how long the device will keep food cold. It could provide long-term storage, like a refrigerator, or it could just hold the ingredients you need for a specific recipe [source: Coelho]. The mechanisms that dispense and combine the ingredients into their final form are all under the lid of the printer.

The Robotic Chef is made up of numerous computerized hands that grip particular food elements. The robotic hands rotate, compress and stretch food components, producing varying results. The device resembles a microscope with a surface plate, which regulates the temperature of food components from below. While the food component is held in place by robotic hands, needles and lasers positioned on the toolhead above apply highly localized cooking methods. The needles inject chosen spice combinations, and lasers can cook portions of the food component.

The Virtuoso Mixer consists of three levels. Each level swivels like a carousel, allowing you to combine different ingredients in varying amounts [source: Marcelo]. The top layer is equipped with eight canisters that hold ingredients. The middle layer also has eight canisters, which combine and mix the ingredients from the top layer. The combinations from the second layer are deposited into the third layer, where sophisticated heating and cooling elements prepare foods.

Read on to find out how the Robotic Chef uses lasers to alter the taste of your filet mignon and how the Digital Fabricator could make the seasoned chef a thing of the past.