How Daylight Saving Time Increases the Risk of Having a Stroke

by Jesslyn Shields Feb 29, 2016
The annual time switch has a brief but measurable effect on instances of a specific type of stroke. Benjamin Shearn/Getty Images

Falling back or springing forward during daylight saving time is a little disorienting — and, sure, maybe even irritating — but one study finds that it might also increase your chances of having a stroke.

Researchers at the University of Turku in Turku, Finland, have found that as most of us engage in our biannual time-fiddling ritual, we might be throwing off our circadian rhythms just enough to temporarily put some people at risk for ischemic stroke. Our circadian clocks are the internal mechanism that helps us sync up our biological functions with all the environmental changes associated with the transition from day to night. This specific type of stroke is caused by a blockage in the artery that carries blood to the brain, and accounts for around 87 percent of all strokes.

"Previous studies show that the disruption of the circadian clock due to reasons like sleep fragmentation and working a rotating night shift are associated with an increased risk of stroke," says study author Dr. Jori Ruuskanen, a specialist in clinical pharmacology and therapeutics at the Turku University Hospital, via email. "However, there were no studies on whether stroke risk is affected by daylight saving time transitions."

Ruuskanen's team looked at a decade's worth of stroke data from hospitals around Finland, and compared the rates of stroke in 3,033 patients hospitalized for stroke in the week immediately following the time change, to 11,801 people who had strokes two or three weeks after daylight saving time (DST). Analysis showed an 8 percent higher incidence of ischemic stroke within the two-day window after the transition, though there was no change in the amount of lethal strokes — so more people had strokes, but more people didn't die from strokes. After that two-day period, there was no difference in rates of stroke.

Although the researchers didn't investigate the habits of the study participants who experienced strokes within a couple days after a time change — whether they were people who generally woke up at the same time every day, for instance — they were able to access other health information. They found people with cancer were 25 percent more likely than everyone else to have a stroke directly after a DST shift, and that the effect of the time change was 20 percent stronger in patients over the age of 65 than in other groups.

"Although from an individual point of view, this small increase in stroke risk we see in a population level is probably not a major issue, the study emphasizes the importance of sleep disturbances as a risk factor for ischemic stroke." says Ruuskanen.

The results of this study were presented at the American Academy of Neurology's 68th Annual Meeting in Vancouver, Canada, in April.

Here's a timely tune from New Zealand, one of the first countries in the world to switch its clocks every year due to its proximity to the International Date Line:

Now That's Interesting
Daylight saving time as we know it has only been observed for the past century, but ancient Romans adjusted their daily schedules to the yearly movements of the sun by using a 12-hour clock in which summer hours lasted longer than winter ones.

Racial History: Oregon Was Whites-only Until 1926

Should We Be Eating Kudzu? 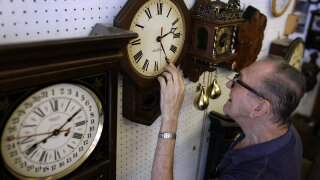 What are the warning signs of a stroke?

Not a Morning Person? Your Body's Circadian Rhythms Could Ease Mars Colonization