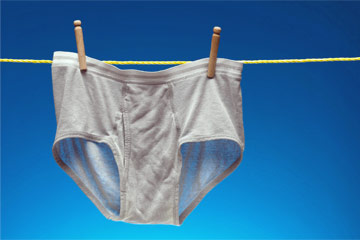 The elastic in these drawers looks as if it has seen better days.
iStockphoto/Thinkstock

Elastic is so ubiquitous today that we barely give it a second thought. Like paper clips and zippers, we simply expect it to work without ever wondering what it is, how it's made or what people did before it existed. Take the elastic waistband. In fact, fetch a pair of underwear (preferably clean) from your bedroom and give them a good once-over. You'll notice the familiar stretch of the band followed by the satisfying springing action as it returns to its original shape. It's like a rubber band, but not. When you put your hands on a rubber band, you touch, well, raw rubber. When you do the same with an elastic waistband, you touch fabric.

Believe it or not, the briefs and boxers so common today, equipped with elastic waistbands, weren't invented until the 1930s and 1940s. Before then, people had to find others mechanisms to hold their undergarments in place.

What took so long? Some of it was a sort of fashion inertia -- if it ain't broke, don't fix it -- but some of it was industrial necessity. Textile manufacturers either had to adapt their operations to produce elastic or find partners that could supply it economically. Either way, making elastic looked no different than making other woven fabrics. It required a loom, which was a machine that allowed lengthwise threads known as the warp to be interlaced with widthwise threads known as the weft. In normal woven fabric, those threads would consist of yarn derived from natural fibers, such as cotton or wool. But in elastic, strands of yarn were laced together with strands of natural or synthetic rubber.

Today, automated looms handle the weaving process, though the results are the same: a stretchy fabric that can be incorporated into an array of garments. So far, we've focused on the elastic waistbands found in boxers and briefs because they make a convenient example. But elastic finds its way into everything from bras and belts to suspenders and flex-waist trousers. Even the ever-handy shock cord, or bungee, begins its life in a textile manufacturing plant.

Cut into any of these stretchable items, and you'll find one common element: fine rubber threads or thick rubber bands just like the ones you use in your office or kitchen. Interestingly, rubber bands are not ancient inventions. Like the waistbands that contain them, rubber bands are a snappy, modern success story.