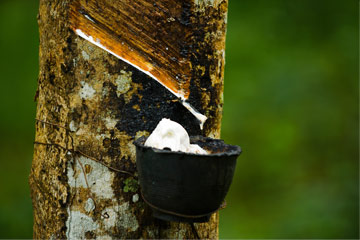 The tree that made stretch pants possible!
iStockphoto/Thinkstock

In the late 1700s and early 1800s, the world had grown quite small. Ships of all sizes carried sailors, pirates and explorers to exotic ports on every continent. Along the way, they saw strange foods, minerals and other natural materials known to the indigenous people of the lands they visited. One of the strangest materials they came across, in Central and South America, was caoutchouc, the French spelling of an Indian term for "weeping wood." The wood in question referred to trees and shrubs in the Hevea genus. When incisions were made in the bark of Hevea trees, they oozed a milky substance known as latex. South American Indians discovered that latex, left to evaporate, produced a pliable, flexible material that could be shaped into balls, applied to cloaks and fashioned into shoes and bottles.

Sailors returning to Europe from Central and South America brought some of the raw material, as well as items made from it. The famed British chemist Joseph Priestley experimented with the stuff in the late 1700s and remarked how it rubbed away pencil markings with great effectiveness. By the time Priestley died in 1804, his so-called "rubber" was in high demand all over the world. Venture capitalists, inventors and get-rich-quick schemers scrambled to transform the stretchy, waterproof material into useful goods and garments. Unfortunately, rubber was stable across a narrow range of temperatures.

Two men, working on both sides of the Atlantic, struggled to make a stable form of rubber. One was Charles Goodyear, a sickly merchant who carried out his experiments in Philadelphia, New York City and Woburn, Mass. The other was Thomas Hancock, an English inventor who had partnered with Charles Macintosh to manufacture waterproof cloaks. Hancock had also devised a way to create simple elastic threads by cutting slices from rubber bottles and raw lumps of rubber. Dismayed by how much waste this process generated, he went on to design and develop, in 1820, the masticator -- a machine that could chew and churn rubber scraps until they became melded together into a single sheet of useful material. And yet elucidating the chemical steps necessary to stabilize rubber at extreme temperatures eluded even the resourceful Hancock.