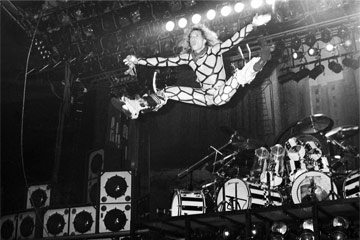 The transformation of latex into usable rubber may be one of the greatest accomplishments of science. But on the heels of that breakthrough came another -- the development of synthetic, or man-made, rubber from petroleum and other minerals. Much of this work occurred during and immediately after World War II, when wartime shortages of natural rubber prompted governments to invest in the appropriate research and development.

All of this R&D led to three important synthetics: butadiene rubber, styrene-butadiene rubber and ethylene-propylene monomer. All of these materials were soft, highly flexible and elastic and could be used, at least theoretically, as direct replacements in products normally made with natural rubber. And yet they all lacked the same flex resistance -- the ability to withstand numerous flexing cycles without damage or deterioration -- as their naturally derived counterpart. While these synthetics were perfectly suited for automobile tires and other industrial applications, they were less popular with textile manufacturers, who still preferred fibers cut from natural rubber.

All of that changed in 1959, when two DuPont chemists introduced a synthetic fiber made from polyurethane, a synthetic resin in which the polymer units are linked by urethane groups. Most people know polyurethane as a major ingredient of paints, varnishes, adhesives and foams. But when the polymer is diluted and then forced through a metal plate containing tiny pores, it forms strands of liquid polymer, which can then be heated and dried to form solid fibers. The DuPont chemists called these fibers spandex, and the company marketed its new product as Lycra, targeting the makers of "ladies foundation garments."

Spandex has some useful qualities for the textiles industry. The fibers, normally dull white, readily accept dyes. They absorb little moisture and remain stable when machine washed and dried at moderate temperatures. But their most attractive feature is extreme elasticity. Spandex fibers can be stretched hundreds of times beyond their original length without breaking and quickly return to their original length. That makes them ideal for an array of garments, in which they are normally accompanied by other synthetic fibers, such as nylon, or natural fibers, such as cotton. For example, a typical Spanx body shaper might contain 80 percent nylon, 18 percent spandex and 2 percent cotton.

When it was first introduced, spandex found its way into the usual garment suspects -- bras, jockstraps and workout gear. Today, spandex might be considered the modern elastic, a key structural material found in 80 percent of all clothing bought by Americans [source: Penaloza]. Manufacturers weave it into everything, from underwear to outerwear, including innovative designs like PajamaJeans, which combine spandex with cotton denim to create form-fitting, curve-hugging pants.

The properties of spandex we love so much are the direct result of some interesting science. Up next, we'll go from the catwalk to the chemistry lab.