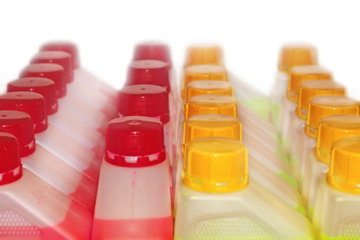 Some studies have discovered toxic compounds in e-cigarettes, including diethylene glycol, which is also found in antifreeze.
Hemera/Thinkstock

Quality control is one of the main issues health experts have with e-cigarettes. They argue that manufacturers may not disclose all of the chemical ingredients used in their products. This means it may be impossible for users to know exactly what they're consuming. There is also not much known about the short- or long-term health effects of exposure to nicotine vapor.

The U.S. Food and Drug Administration (FDA) conducted a small study in 2009 to analyze a sample of nicotine cartridges from two manufacturers. The results showed that the amount of nicotine delivered did not always match the amount stated on the label. The study also revealed that some cartridges labeled nicotine-free in fact contained nicotine. And cancer-causing compounds found in tobacco were also found in some e-cigarette cartridges, along with other toxins. One of the toxins found was diethylene glycol, a toxic chemical used in antifreeze. [source: FDA].

Despite these findings, electronic cigarette manufacturers claim that their products may have the potential to improve the health and lives of people addicted to nicotine. But many health experts say e-cigarette makers haven't conducted the research needed to back up their claims. The World Health Organization (WHO), for example, says there is not enough evidence to show that e-cigarettes are safe.

Health experts are also concerned about companies marketing e-cigarettes as a way to quit smoking. Nicotine replacement therapy (NRT) products like the nicotine patch or gum have been tested for their safety and effectiveness as smoking cessation aids. E-cigarettes have not. Some experts have expressed concern that marketers' claims -- or positive word-of-mouth from e-cig users -- may convince people to use e-cigarettes to try to stop smoking, instead of a method that has been proven effective.

Another question is whether nonsmokers will be attracted by the novelty or the perceived safety of e-cigarettes and take up the habit, thus becoming addicted to nicotine. This is especially important where younger consumers are concerned -- the candy-like flavors may particularly appeal to children and adolescents. And because e-cigarettes are sold online, young people may have easy access -- most companies don't check or confirm the age of their Internet customers.

While e-cigarettes may help consumers avoid many of the health risks of smoking tobacco, they still give users a dose of an addictive substance. Regulatory authorities are struggling to classify electronic cigarettes and introduce the right controls. If e-cigarettes continue to gain popularity, they may become a common sight in restaurants, movie theaters, offices and other venues. Is that a good thing for the public? On the next page, we'll look at a few key issues that e-cigs raise about health, safety and personal freedom.