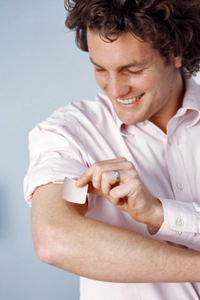 Can electronic cigarettes help people quit smoking as effectively as a nicotine patch or gum? Some argue that the devices are unlikely to encourage smokers to quit.
iStockphoto/Thinkstock

One of the problems of regulating e-cigarettes is deciding how to classify them. Are they similar enough to tobacco cigarettes to be regulated in the same way? Or are they not cigarettes at all but drug-delivery devices like nicotine patches or gum? Because they don't fit easily into either category, e-cigarettes may require a new set of regulations.

Many people want to know if they can use electronic cigarettes in places that restrict tobacco smoking. Manufacturers and e-cigarette users argue that because the vapor presents no health risks and no offensive odor, e-cigarettes should be permitted everywhere.

E-cig opponents argue that allowing e-cigarette use everywhere may discourage people from cutting back or quitting smoking by making it easier and more socially acceptable to get a nicotine fix. Inconveniences like shivering outside in the cold to enjoy a smoke may actually contribute to some smokers' desires to quit. And until the vapor that e-cigarettes emit is proven safe, harmful effects from secondhand vapor can't be ruled out.

Individual countries and states have adopted a wide range of rules governing e-cigarettes. Australia, Canada and Hong Kong have banned e-cigarette marketing and sale. In the United Kingdom, e-cigarettes marketed as a smoking-cessation aid must be licensed and regulated as a medicine, but their use as a recreational smoking alternative is unrestricted. Brazil regulates e-cigarettes as tobacco products. In the United States, the FDA has confiscated e-cigarette shipments coming into the country on the grounds that they are unapproved drug-delivery devices. Two e-cigarette manufacturers took the FDA to court to oppose this action and won [source: U.S. District Court for District of Columbia].

Regulations will continue to evolve as electronic cigarettes grow in popularity and experts seek to gain reliable information about them. In the meantime, users around the world are relishing the experience of smoking cigarettes without the smoke.