Is glass really a liquid? 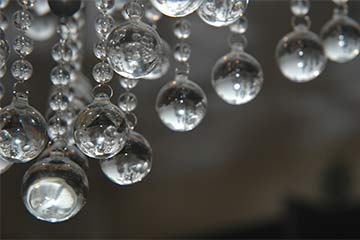 Glass sometimes looks like it has liquid inside. But what is it?
Lisa Barreca/iStock/Thinkstock

The 2002 movie "Sweet Home Alabama" stars Reese Witherspoon as Melanie Smooter, a reinvented New York fashion designer forced to return to her Southern roots -- and a not-quite-ex-husband -- before she can marry her socialite fiancée.

It also stars (presumably) liquid glass as a key plot twist. In the time she's spent becoming a New Yorker, Smooter's old Alabama flame, Jake Perry (played by Josh Lucas), has built a lucrative business. He races to plant lightning rods in beach sand just before a storm crops up. When lightning strikes the rods, it's directed into the sand. This turns the sand into glass sculptures, which Perry harvests, cleans and sells in his gallery, a successful enterprise Smooter uncovers only after she's well on her to way falling in love with him all over again [source: IMDB].

But there are more problems in this plot than just Smooter's love life. Perry's lightning sculptures may be rooted in real life, but they are portrayed with a heavy dose of cinematic liberty. The sculptures shown in the movie look like blown glass, sculpted into ethereal-looking abstract forms by a master hand. However, the reality is not always so delicate, either in appearance or substance. In real life, when lightning hits sand that contains silica or quartz, the 1,800-degree Celsius (3,272 degrees Fahrenheit) heat travels underground and melts the sand into silica glass. The glass, known as fulgurite, is hollow and usually takes on a tube-like shape, often with branches radiating out from a central core. The result is a shape that mimics driftwood [source: Hill].

Glass, whether the end result is fulgurite, a window or a mirror, begins life in a viscous, malleable form. It's created by heating silica and other elements -- including sodium carbonate, lime and magnesium oxide -- to a liquid-like state. It is then shaped and cooled [source: Corning Museum of Glass].

Despite the fact that superheated glass looks and acts like a liquid, it may not actually be one at all. When most elements are heated, their molecules begin to move freely, resulting in a liquid form that can be poured. Even though superheated glass can mimic a liquid, it actually acts as one molecule when it cools, a quality that keeps it rigid at room temperature. Glass is, in fact, an amorphous solid that does not have a completely organized crystal structure. It exists in a state of "in-between," which means that it is not a true solid -- but not a true liquid either. Scientists postulate that it would take longer than the universe has existed for room-temperature glass molecules to change their shape [source: Curtin].

In a sense, the timeframe that would be required for glass to flow, or to rearrange its molecules, on its own is so extensive that it acts like a solid. For example, scientists studying a 20 million-year-old sample of preserved amber found that it did not continue to flow, despite being exposed to a variety of temperatures. While not all glass is as stable as amber, even glass that is truly an amorphous solid can take eons to change its shape on its own [source: Zhao].