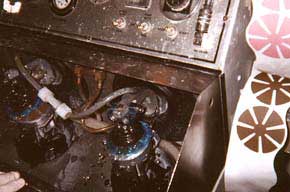 A cylinder machine can sand two lenses at the same time. Air pressure holds the lens and the sanding block together, and a timer switches the machine off at a preselected time.

Step 7: The lens is taken off the generator and placed in a special sanding machine (called a cylinder machine) to remove any marks left by the generator. To do this, sandpaper is glued to a block with reversed, matching curves (a +2.00 base/+2.50 cylinder, for example, to match -2.00/-2.50 generated curves), and the lens and block are rubbed together. Meanwhile the lenses are kept cool and cleaned with water.

Following the sanding operation, the lenses are polished on an identical machine, except that felt polishing pads washed with polishing compound are used instead of sandpaper and water. When this step is completed, the lens is optically clear without visible scratches.

After sanding, the lenses are polished so they are perfectly clear without any scratches. Liquid polish flows over the lenses and into a reservoir to be recirculated.

Step 8: The block is removed from the lens, and the lens is washed and inspected. Sometimes special coatings may be applied to the lens. At this point the lens blank has had additional curves ground in the back of the lens and it has been polished. However, the large diameter blank still has to be sized and shaped to fit into the frame selected by the patient. Several methods are used, depending on the equipment, but they are all based on the following description.

Step 9: The lens blank is shaped on a linear lathe (called an edger) using either a ceramic or diamond grinding wheel or stainless steel blades. The lens must again be prepared to accept a chuck, but since only the edge is being cut, a much gentler system is used. A small chuck receiver is placed where the geometrical center of the finished lens will be, and the lens is then oriented on the 180 axis. Usually, only an adhesive pad is needed to hold the receiver on the lens. The lens is chucked in the edger and held in place by a pressure pad that presses on the opposite side of the lens (like holding a very large coin between your thumb and forefinger at its center).

The lens is mounted into an edger. The edger's chuck turns slowly as the lens is cut to shape.