Browse the article How Stethoscopes Work 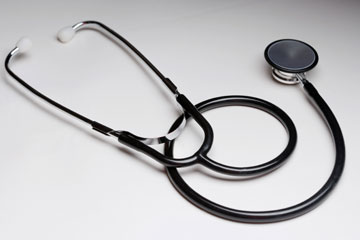 Sound has been used as a diagnostic tool for millennia [source: NPR]. You can learn a lot with an ear to a person's chest -- that the heart valve isn't fully closing, for instance ("whoosh"), or that the bowel is obstructed ("gurgle"). Listen a bit lower and you can determine the size of the liver [source: IPAT].

The initial stethoscope was invented in the early 19th century by French physician René Laennec. His invention helped him hear body sounds more clearly, yes, but Laennec was actually trying to achieve a rather different end: doctor-patient distance. Hygiene in the 1800s was not what it is today, and the doctor was tired of pressing his face against dirty, smelly, lice-ridden bodies [source: NPR].

Laennec's stethoscope was basically a hollow tube. Other innovators created progressively more complex designs, culminating with Harvard-based doctor David Littman's stethoscope, which is pretty much the same as the one that hangs around the necks of healthcare providers today [source: NPR]. These stethoscopes can pick up sounds as faint as fetal heart beats just six weeks into a pregnancy. And while their most common use is in detecting heart, breath and, in conjunction with blood pressure cuffs, blood sounds, they can also be crucial tools in detecting abnormalities in digestive and venous systems [source: EoS].

How? It's actually a pretty basic approach to harnessing the properties of sound. To understand how a stethoscope conveys, say, the "lub-lub" of a heart beat from a heart to a doctor's ears, we'll start with the core components of the tool. As it turns out, there's a mere handful.

Today's stethoscopes are a far-cry from a hollow tube, but for what they can accomplish, they're remarkably simple devices. In a basic acoustic stethoscope, which is still the most common type in use today, you're looking at three main sections and a total of five crucial parts [source: MyStethoscope].

Chestpiece: This is the part that contacts the patient, capturing sound. There are two sides of the chestpiece. On one side is the diaphragm, a flat, metal disc that in turn contains a flat, plastic disc. The diaphragm is the larger component of the chestpiece. On the other side is the bell, a hollow, bell-shaped piece of metal with a tiny hole on top. The bell is better at picking up low-pitch sounds, such as heart murmurs (the aforementioned "whoosh"); the diaphragm excels in the higher-pitch range, which includes normal breath sounds and heartbeats ("lub-lub") [source: IPAT].

Tubing: A Y-shaped configuration of rubber tubes runs from the chestpiece to the headset. The sounds picked up by the chestpiece initially travel through a single tube, eventually splitting into two channels as they near the headset so the listener can hear it in both ears. Stethoscope tubing typically ranges from about 18 to 27 inches (45 to 68 centimeters) long.

Headset: The rubber tubing ends at a set of metal tubes that carry the sound to the eartips in the listener's ears. The eartips are made of soft rubber, not only for comfort but also to create a seal that helps block out environmental noise.

It's not a fancy machine. The stethoscope picks up sound much as our eardrums do. The big difference is in how the sound arrives there.

Some modern twists on the traditional acoustic stethoscope include the tunable diaphragm, which combines the bell and the diaphragm on one side of the chestpiece; noise-cancelling elements in the earpieces to block out more outside sound; and electronics in the chestpiece that record and output sound as digital files.

If you've read How Hearing Works, you know that sound is essentially a disturbance in air pressure. When you strum a guitar string, for instance, that string vibrates (just as our vocal chords do when we speak). Those vibrations cause fluctuations in air pressure as they move outward, traveling in waves. When these waves of pressure variations reach our eardrums, our eardrums vibrate, and our brains interpret those vibrations as noise.

Our eardrums, like the larger side of a stethoscope's chestpiece, are diaphragms.

When a doctor or nurse places a stethoscope diaphragm on a patient's chest, sound waves traveling through the patient's body cause the flat surface of the diaphragm to vibrate. Those vibrations would travel outward if the the diaphragm were a standalone device, but because the vibrating object is attached to a tube, the sound waves are channeled in a specific direction.

Each wave bounces, or reflects, off the inside walls of the rubber tube, a process called multiple reflection. In this way, each wave, in succession, reaches the eartips, or rubber nubs on the ends of the device, and finally the listener's eardrums.

The waves of high-pitch sounds, like breath and heartbeats, are traveling at higher frequencies, meaning they cause a greater number of pressure fluctuations in a given time period. Higher-pitch sounds will directly vibrate the surface area of the large, flat disc (and the plastic disc inside). This basically means the sound waves caused by the opening and closing of an artery, for instance, are the same ones that travel through the stethoscope tubing to the listener's ears.

The bell works somewhat differently. Rather than picking up the vibrations caused by the artery's movement directly, it picks up the vibrations in the skin caused by that movement. The smaller, hollow bell contacts the patient with less surface area -- just the thin, metal rim. Lower-pitch sounds, which may have a harder time vibrating the large diaphragm, still vibrate the skin as they move outward. The skin then vibrates the bell.

Because the vibrations hitting the chestpiece are funneled into a narrow tube, instead of being allowed to travel outward at will, more of them reach the eardrum. In this way, the sounds they're carrying are amplified.

It's a neat trick. Using a stethoscope, a person more than 2 feet (0.6 meters) away from a patient's chest can hear louder heart sounds than a person whose ear is in direct contact with the patient. Diagnostically, this makes the stethoscope an invaluable medical tool.

Olfactorally, it makes it a godsend, just in case some patients today are still practicing hygiene at the early 19th-century-era standard. Sometimes, even in medicine, distance is a good thing.

Anyone can buy a stethoscope, but it can also be an interesting DIY project. You can make one using items you likely have lying around the house right now. Just take a cardboard paper-towel tube and, using duct tape, secure a small kitchen funnel to one end (concave side facing out). Voilà, a stethoscope.

I chose to go only briefly into the nature and behavior of sound because there are several HowStuffWorks articles that delve deeply into the subject. Perhaps best among these is How Hearing Works, which I mentioned in the section "Picking Up Sounds." The page on sound is also worth a look; and for those who really want to dig deep, check out How Virtual Surround Sound Works, The Sound of Silence and, one of my personal favorites, Can two cans and a string really be used to talk over a distance? (OK, that last one isn't that deep, but you know you've wondered.)