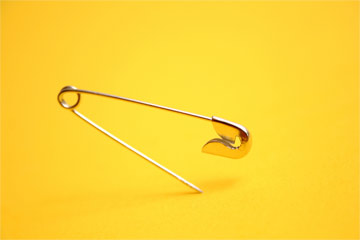 Those little devils are surprisingly hard to find when you actually need some.
iStockphoto/Thinkstock

Here's one thing you will not learn about the safety pin from this article:

Why, when you need a safety pin, you can never seem to find one. Not in the bottom of your makeup bag, not in that little pouch of your backpack you're certain you stowed one for emergencies, not even in the kitchen junk drawer, which -- come on -- has 19 paperclips instead, and do you no good.

No amount of research can determine the cause of this phenomenon, and the mystery will remain until we unlock the secrets of space, or the pyramids, or all those other things that are eerie and obnoxiously hard to understand.

But here's what we will get you:

A surprisingly interesting account of the man who invented the safety pin. And Walter Hunt's tale is one of those achingly unfortunate stories that seem to accompany so many inventors. The guy was pretty much a genius at finding simple improvements to everyday objects, but the poor dude did not know the first thing about how to market, sell or -- most important -- trademark and patent his products.

Well, one of those needs a caveat. Hunt knew how to sell his products; he just didn't know how much the ideas were really worth. In fact, legend has it that Hunt was simply fiddling with a piece of wire while trying to figure out a way to pay off a $15 debt when he invented the safety pin in 1849. He sold the idea outright for $400. Please take a moment to imagine the royalties you could receive from every safety pin sold in the world today.

Depressed that you didn't think of it (and patent it) first? Well, just wait. Sure, the story of Walter Hunt and his inventions won't help you hold together that broken spaghetti strap on your dress, but you just might gain a stronger appreciation for the tiny pin that does. 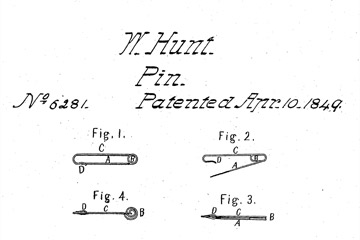 First off, the Romans and Greeks might roll their eyes at the idea that Walter Hunt invented the safety pin in 1849. They were, after all, using brooches and the like way before him. But Hunt created a pin with a coiled end (the twisted loop at the end of the pin) that provides a springing mechanism. He added a "clasp or catch" in which the point of the pin would be safe from tender fingers, when secured [source: U.S. Patent Office].

But for Hunt, ingenuity alone wasn't going to cut it. The safety pin was one of many nearly tragic business decisions in his life. By most accounts, Hunt seemed to have a knack for inventing a really cool product and immediately selling it, with no thought to the larger economy that could spring forth from his design.

Chief among those? The sewing machine. Yes, Mr. Hunt was the first to actually invent some of the significant parts of the machine, including a curved needle and shuttle. In 1833, Hunt created his prototype in wood, which didn't work so well. So Hunt sold the idea; the company that bought it made the machine in metal and put the machine on public display.

However, when two businessmen (Elias Howe and Isaac Singer) fought to control the patent of the sewing machine in the 1850s, Hunt was brought back in. Singer -- trying to discredit the patents Howe had filed -- had Hunt attempt to claim a backdated patent on his 1833 machine. Unfortunately, while the judge acknowledged Hunt as the inventor, the statute of limitations didn't allow for a patent so far out. Howe kept the patents, and later even teamed with Singer -- without a penny to be paid to Hunt.

Stymied again! But Hunt seemed to still take serious joy in the act of invention. He created -- among many other things -- a foot-pedal alarm to warn those in the way of streetcars, a knife-sharpener, an ice-plow for ships and an "antipodean" walking device. (that is, suction-cup shoes that allowed a "human fly" or other circus act to walk on the ceiling or walls).

So the next time you see Spider-Man scaling a building, perhaps you should be less impressed with the superhero and more grateful for Walter Hunt. Not only did he provide Spidey a neat trick, but he also gave our costumed friend a neat way to pin his spandex suit together without getting pricked.

This is exactly why I don't invent things. Not because I don't have some awesome ideas -- and I have many, mind you -- but because I would take a ballpark figure of fifteen dollars for any one of them. Hunt's story reminds us that while invention is a creative, inspired process, business savvy is not -- and business adroitness is what is going to get your invention to the masses.