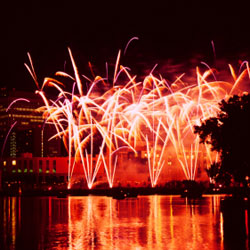 You can thank ancient Chinese alchemists for fireworks -- and bullets.
Lawrence Sawyer/iStockphoto

We'll begin with arguably the most famous ancient Chinese invention. Legend has it that gunpowder was accidentally discovered by alchemists looking for a concoction that would create immortality in humans. Ironically, what these ancient chemists stumbled upon was an invention that could easily take human life.

Early gunpowder was made of a mixture of potassium nitrate (saltpeter), charcoal and sulfur, and it was first described in 1044 in the Collection of the Most Important Military Techniques, compiled by Zeng Goliang [source: Chinese Embassy in South Africa]. It's assumed the discovery of gunpowder occurred sometime earlier, since Zeng describes three different gunpowder mixtures and the Chinese used it for signal flares and fireworks before appropriating it for military use in rudimentary grenades.

Over time, we realized that metals added to the mixture created brilliant colors in gunpowder explosions and -- kaboom! -- modern fireworks displays were born. It also makes a handy explosive for projectiles like bullets.