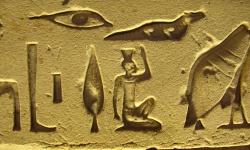 The use of drawings to tell stories is certainly nothing new; cave paintings found in France and Spain date all the way back to 30000 B.C. [source: Wherely]. But drawings and paintings wouldn't evolve into the first written language for thousands of years, when the first writing systems arose out of Egypt and Mesopotamia.

The Egyptian writing system began with pictograms, the first of which date back to 6000 B.C. [source: Harrow]. Pictograms were simple depictions of the words they represented, but they had limitations. Over time, Egyptians added other elements to their writing system, including alphabetlike characters that stood for certain sounds and other characters, allowing them to write out names and abstract ideas.

Today, everyone knows the Egyptians for the creation of hieroglyphics, which contained a mixture of alphabetic, syllabic symbols, as well as ideograms -- pictures that stood for whole words -- found extensively within Egyptian tombs and other places. The writing tells tales of war, politics and culture that give us a great understanding of ancient Egyptian society. Of course, we have the Rosetta stone to thank for our ability to interpret the writing. Its discovery, along with the work of French scholar Jean-Francois Champollion to decode the stone, marked the end of a 1,500-year-period during which Egyptian writing was shrouded in mystery [source: Discovering Egypt].