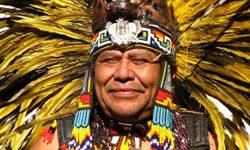 Shown here is an Aztec tribal elder. Though the Aztecs were known as fierce warriors, their culture also set the stage for universal education and modern sports.
Hemera/Thinkstock

The Aztecs are best known as a violent people who expanded their empire through ruthless warfare. They also had a reputation for making human sacrifices in elaborate rituals -- that often involved the removal of beating hearts -- to appease their many gods. While these practices were certainly true, the culture also gave birth to elaborate crafts, a highly organized system of government and a language -- Nahuatl -- that's still spoken by a million people.

In many ways, the Aztecs' warlike ways were born out of necessity. Originally part of a tribal collective known as the Chichimec, the people who would become the Aztecs wandered toward southern Mexico in the early 12th century. They arrived in the Valley of Mexico around 1250 A.D., but they found the land already populated by different city-states. For the next 75 years, the Chichimec were shunned and forced to live where there wasn't much farmable land.

They eventually settled on an island in Lake Texcoco, where, according to legend, they saw the sign foretold by their patron god Huitzilopochtli: an eagle on a cactus. The Aztecs established their city of Tenochtitlan -- present-day Mexico City -- there in 1325 A.D. Other city-states remained uneasy with their new neighbors, though, and fighting continued. Finally, they formed an alliance with two other major settlements in 1430, and the Aztec empire was born.

The empire flourished until Cortés arrived in 1521, and the Aztecs achieved many impressive accomplishments, as we'll see on the following pages.

Because the Aztecs got the last of the land that was up for grabs in the Valley of Mexico, it wasn't rich farmland. Actually, living on an island in the middle of a swampy lake meant there wasn't much land at all. But that didn't prevent the Aztecs from growing enough food to support a population that, at its height, required 88 million pounds of corn per year to feed just the residents of the capital city, Tenochtitlan [source: Green].

So how'd they do it? The Aztecs produced prodigious amounts of corn, beans and squash, and they even raised animals such as turkeys through the use of floating gardens known as chinampas.

To create these agricultural wonders, areas of approximately 90 feet by 8 feet (27.4 meters by 2.4 meters) were staked out in the lake. These stakes were joined by poles intertwined with reeds, twigs and branches. This rectangular enclosure was then filled with mud and decaying plant matter to raise it above the surface of the lake. Willow trees (which were pruned so they wouldn't block too much sunlight) were planted around the border. As they grew, the trees helped anchor the floating plot to the lakebed.

Human manure was used as fertilizer, which served the dual purposes of providing nutrients for the crops while keeping the city clean.

The main staple of the Aztec diet was corn, which was typically ground and made into tortillas. It was also turned into popped corn, which was a tradition the Aztecs picked up from their Mayan predecessors. Wealthy Aztecs enjoyed an early form of hot chocolate known as cacahuatl that they inherited from the Mayans. One thing they didn't consume, however, was alcohol. It was illegal throughout the empire … until the age of 70, that is, when it was fine to drink away.

Schoolchildren who bemoan the modern law requiring them to attend classes can blame the Aztecs, who developed a system of compulsory education for all of their children. But any grade-schooler who complains about getting on the bus in the morning should think about how easy he or she has it.

For Aztec children, education began in the home, with girls learning domestic chores and boys learning their fathers' trades. Youngsters were given only a small amount of food so they could learn how to squelch their appetites. Boys had to undergo the additional hardship of exposure to extreme temperatures, designed to help them develop yolteotl, a heart of stone, which was part of their warrior training [source: Reagan].

Perhaps, then, it was a relief to go off to school.

From the ages of 12 to 15, all children were required to attend a school known as a cuicacalli, or house of song, where they learned ceremonial songs and the cosmology of their people. Kids were escorted to and from this school by elders to ensure no one went truant.

For most girls, formal education ended at age 15, but from 15 to 20 years of age, the boys of commoners attended a school known as telpochcalli, where they slept at night. The study here was primarily military in nature. Sons of the nobility, however, attended a different school called calmécac, where they stayed in residence and had their military training enhanced with a study of the humanities such as architecture, math, painting and history. Priests and government officials were chosen from the calmécacs.

Well, it wasn't quite the game we know as soccer today, but the Aztecs did play a game that could very well have been a precursor. It was called ollama, and was played on a field called a tlachtli, which is often used interchangeably as the name of the game. The tlachtli was shaped like an "I" and had walls that were approximately three times the height of the men on the field. Attached near the top of these walls were stone rings said to represent the sunrise and sunset. The aim of the game was to knock a small rubber ball (which represented the sun, moon or stars) through the rings using only the hips, knees or elbows.

Ollama was played by the Aztec forebears, the Mayans, but in Aztec society, the game received an elevated status and was played only by the nobles. As with many other things in Aztec society, the game could get extremely violent. Instead of a halftime show, human sacrifices were involved in the ollama ritual. Additionally, whenever one team scored, they were allowed to try to rob the spectators.

The other way in which the audience participated in ollama was through betting, which they apparently did quite heavily. In fact, two of the great evils Aztec children were warned about were excessive ball playing and gambling. Nonetheless, there are reports of Aztec citizens betting so heavily on the game that they were forced to sell themselves into slavery to pay their debts.

Ollama wasn't the only dangerous sport the Aztecs played. They also participated in an activity known as volador to the Spanish. For this game, a large pole was erected in a village, and four ropes were tied to a platform at the top. Four men wearing bird wings would tie the other end of the ropes to their waists and leap off. As the ropes uncoiled and the platform spun, the men would spiral to the ground and plant their feet in the soil after 13 revolutions. Hopefully.

In addition to studying the humanities, the Aztecs were also great observers of the human body, with the tictil, or physicians, becoming quite accomplished herbalists who were encouraged to do research in the large gardens kept by the nobility.

One of the important works that sheds light on Aztec herbal practices is known as the Badianus Manuscript, a codex (or illustrated text) from 1552 that describes the use of over 180 plants and trees in the treatment of ailments.

Some treatments seem quite bizarre by today's standards. For example, the prescription for "pain or heat in the heart" included among its ingredients gold, turquoise, red coral and the burned heart of a stag, while a persistent headache could be cured by making a cut on the skull with a blade made from obsidian [source: Nicholson; Nguyen].

But other cures have since been held up by scientific research. A substance the Aztecs used as a painkiller called chicalote has been found to be Argemone mexicana -- a plant closely related to the opium poppy, which, of course has analgesic properties. The tictil also relied on the sap of the maguey (agave) plant as a disinfectant and wound treatment. It has since been shown that this sap can kill both Staphylococcus aureus and E. coli bacteria.

One herbal remedy that the Aztecs discovered that's still in use today is passionflower, a creeping vine that got its name from Spanish missionaries who believed they saw the crown of thorns reminiscent of Christ's "passion" in the flower's composition. The Aztecs employed the plant as a sedative, much in the same way it's used today in herbal preparations designed to fight insomnia and agitation.

As a nation of warriors, there's little doubt that Aztec leaders often saw red. But thanks to one of their innovations, the Aztecs helped the rest of the world see it as well.

Prior to the Spanish conquest of the Aztecs in the early 16th century, the European world had never experienced fabric dyed a deep scarlet color. The best cloth that could be produced was dyed with a plant extract known as madder red, which produced a paler color than the Aztecs were making. Their secret ingredient? The cochineal beetle.

The cochineal is a tiny beetle that lives on prickly pear cacti. Fortunately for cloth-dyers, but maybe not so much for the beetles, about one-quarter of the bug's body consists of carminic acid, which is what produces the red dye. This means that 70,000 insects were needed for every pound of dye produced. Once the dye was discovered by the Spaniards, they immediately began exporting it home and doing their best to keep the source a secret. This made it a staple of their economy for 300 years. The dye was so expensive that it was used only for the red coats of officers in the British army (while the rank and file wore madder-dyed cloth). The rich red also contributed to the robes of Catholic cardinals [source: Mursell].

By the end of the 19th century, a synthetic replacement for cochineal had been found and the bug dust fell mostly out of favor -- but not necessarily out of flavor. Cochineal is still used today as a popular food dye. It is, after all, completely organic.