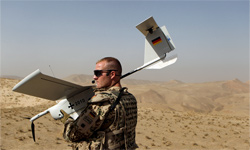 A NAV will be a lot smaller than the EMT Aladin airborne reconnaissance drone this German soldier is using for close area imaging during patrol on Oct. 17, 2010, in Afghanistan.
Miguel Villagran/Getty Images

Many people don't know it, but USPTO can apply a secrecy order to a patent if patent office staff and their military advisers think the idea could be used to threaten national security. Once the USPTO decides that a technology is no longer a threat, it can publish the patent and pave the way for commercialization. Some patents may remain cloaked under a secrecy order for one or two years; others languish for decades. More than 5,000 patents -- inventions we may never know or see -- currently have secrecy orders attached to them [source: Marks].

That's not the end of hush-hush inventions. Each year, the Pentagon sets aside billions of dollars to develop top-secret military weapons. This so-called "black budget" has grown tremendously since the Sept. 11 attacks, surpassing even the funds spent at the height of the Cold War. Some of that money has gone toward the development of nano air vehicles (NAVs), remote-controlled micro-drones that could easily infiltrate enemy territory. We all know how the U.S. military has used larger drones to conduct reconnaissance, transport supplies and even target individuals. Unfortunately, the larger attack drones, such as the MQ-1 Predator, can result in unwanted civilian casualties.

Lockheed Martin's Samarai micro-drone could solve that problem. Weighing a mere 5.29 ounces (150 grams) and boasting a 12-inch (30-centimeter) wingspan, the Samarai looks like a maple-seed whirligig, except this one comes with a miniature jet engine to provide thrust and a tiny flap on the trailing edge of the wing to control direction. In the near future, this nature-inspired micro-drone will snap photos using a camera mounted on the gadget's central hub. But the longer-term goals are to turn the Samarai or other similar micro-drones into armed attack vehicles capable of killing a single individual with little or no collateral damage [source: Weinberger].