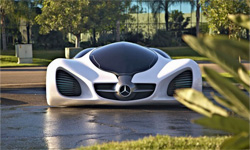 Mercedes-Benz has been an innovator for decades. You can thank the German auto manufacturer for diesel and supercharged engines on passenger cars, antilock brakes, electronic stability systems and more. But nothing could be more innovative than the BIOME concept car, unveiled at the Los Angeles Auto Show in November 2010. Here's how the official press release described the vehicle: "The Mercedes-Benz BIOME grows in a completely organic environment from seeds sown in a nursery. Out on the road the car emits pure oxygen, and at the end of its lifespan it can be simply composted or used as building material."

Engineers from the Mercedes-Benz Advanced Design Studios in Carlsbad, Calif., created the car as part of the Los Angeles Design Challenge, which called for a safe and comfortable compact car of the future that could accommodate four passengers, demonstrate good handling and weigh only 1,000 pounds (454 kilograms). The BIOME represents the Mercedes-Benz vision. It is made from an ultralight material called BioFibre so that the finished vehicle, though wider than a typical car, only weighs 876 pounds (397 kilograms). If you think that sounds too good to be true, then get this: The BIOME isn't assembled. It grows from two seeds -- one that forms the interior and one that forms the exterior. The wheels germinate from four additional seeds placed in the nursery.

Of course, you won't find the BIOME at your local Mercedes-Benz dealer. That's because the far-out design is a vision of the future -- a concept car that's decades ahead of its time. As such, it couldn't exist today. But it might be as common as a Corolla after 20 or 30 years of innovative thinking and inspired engineering [source: Leavitt].