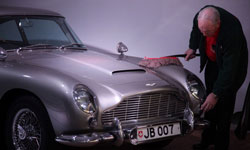 Remember James Bond's tricked-out Aston Martin in the 1964 movie "Goldfinger" -- the one equipped with hidden machine guns, pop-out razor rims to slice pursuer's tires and an ejector seat? Wouldn't you love to outfit your Toyota Yaris with some of that stuff?

The high-powered weaponry, alas, probably is a bit impractical, not to mention dangerous. But there is a company that offers an electronic license-plate flipper of the sort that Bond used to conceal his identity from prying eyes. The $79.00 Vehicle Plate Flipper doesn't allow you to impersonate a Swiss or French driver, but it does flip down at a 90 degree angle at the press of a button to display a message on an underlying plate for the driver behind you. There's also a special $74.99 version for motorcycles.

We're not sure that this gadget will ever become widely popular, though, in part because some of the device's conceivable uses -- hiding your identity from red light cameras and police, or provoking tailgaters with taunting messages -- could get drivers in a lot of trouble. Indeed, the company that sells the device attaches a disclaimer to its Web site, warning that the gadgets are "STRICTLY intended for off-road use only" and informing potential customers that they take responsibility "for all liabilities associated with the use or misuse of our product" [source: Plateflipper.com].