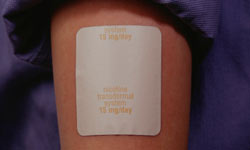 Because nicotine can be absorbed through the skin, patches help smokers quit by giving the user a mild nicotine buzz without cigarettes.
Spike Mafford/Thinkstock

Cigarettes are addictive and unhealthy. Who knew? Well, at one point in time, no one did. Smoking was considered glamorous and was accepted everywhere. Movie stars of the 1940s and 1950s smoked cigarettes in every scene. Even in the 1980s, smoking was still very common. But by then, some researchers were trying to figure out why cigarettes were addictive and looking for a way to break the habit.

The most successful of those researchers was probably Dr. Murray E. Jarvik, who studied the effects of nicotine in the '60s and '70s and determined it was the addictive ingredient in tobacco. Jarvik and one of his students knew that tobacco harvesters often suffered from "green tobacco illness," a form of nicotine poisoning that resulted from skin contact with tobacco leaves, and began testing the dermal application of nicotine in 1984. And just like that, the nicotine patch was born.

Well, almost. Jarvik's discovery led to a 1985 patent request from the University of California, but prescription nicotine patches didn't actually hit store shelves until 1992. A few years later, nicotine patches were available over the counter without a prescription, and ever since then, they've been helping smokers stamp out their cigarette habits.