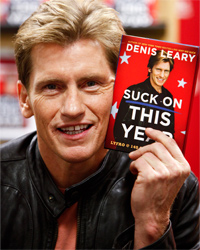 Ah Denis, people have been doing that shtick for centuries.
Brian Ach/WireImage/Getty Images

It's strange to think of comedy being invented, but as a dramatic or literary genre, it had to begin somewhere. That somewhere was ancient Greece, probably around the fifth century B.C. Most scholars believe that comedy arose out of the revels associated with the rites of Dionysus, a god who embodied the fertility of nature. In fact, the word "comedy" comes from the Greek verb komos, meaning "to revel." If you know anything about the Dionysian festivals -- known as Bacchanalia to the Romans -- then you know what took place. Revelers drank a lot, had sex and, in general, participated in all forms of debauchery. Joking and laughing most certainly played important roles in the celebration.

In Greek theater, comedy evolved through three forms -- Old, Middle and New. Old and Middle comedies took aim at myths or practiced political satire. Early comedies, however, could have complicated plots and were not bust-your-gut funny. This gave rise to New Comedy, which focused more on the mundane lives of mere mortals [source: Poundstone]. As such, it tended to be cruder and simpler -- sort of like "Arrested Development" or "Three's Company" with a chorus.

Arguably, the most notable practitioner of New Comedy was Menander, a prolific Greek playwright who lived from about 342 to 291 B.C. Menander may have been the first insult comic [source: Poundstone]. His influence has been strongly felt throughout the centuries. Even the shock comics of more recent times, from George Carlin and Sam Kinison to Denis Leary, owe a small debt to their ancient peer Menander and to the invention -- comedy -- he helped to refine.

Sexual health certainly improved with the introduction of the invention on the following page.