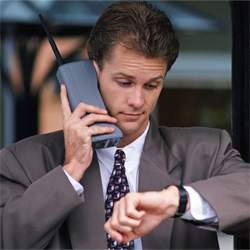 Ah, the 1980s. Who can forget the advent of MTV, big hair bands, parachute pants, leg warmers and "greed-is-good" Gordon Gekko, taking a stroll down the beach while he speaks to hero Bud Fox on a monster-sized mobile phone? That telecommunications device could be one of the funniest machines ever built. Start with the DynaTAC moniker, which stands for "Dynamic Adaptive Total Area Coverage." Huh? Maybe Motorola figured the unwieldy name would distract people from the fact that the world's first commercial hand-held mobile phone was barely mobile at all. It measured 13 by 1.75 by 3.5 inches (330 by 44 by 89 millimeters) and weighed 28 ounces (793 grams). Compare that to an Apple iPhone 4, which is just 4.5 inches (115.2 millimeters) high and tips the scale at 4.8 ounces (137 grams).

But the DynaTAC's size wasn't its most amusing feature. That honor belonged to the rubber-sheathed whip antenna, long enough to take out an eye if the caller wasn't careful. The phone's battery life was just as silly. You could only talk for 30 to 60 minutes until it was time to recharge, which could take 10 hours unless you wanted to pay extra for a fast charger. Paying extra, however, wasn't a palatable option for most users, especially when you consider the cost of the phone itself -- almost $4,000 in 1983 dollars. You did get enough memory to store 30 contacts and a cool LED display showing red numbers, so maybe it was all worth it.

But here's the big question. Will, say, Motorola's RAZR make us laugh as hard 30 years from now as the DynaTAC makes us chuckle today? Only time will tell.

Head to the next page to learn how an intoxicating beverage left its mark on humanity.