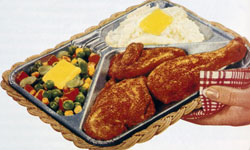 TV dinners are just one innovation we owe to television.
Fotosearch/Getty Images

The idea of the television affecting humans' diets may seem silly, but take the case of the TV dinner. The popularity of the TV during the mid-20th century carried into dinnertime for the average American family. To make tube-viewing more convenient during mealtime, companies created ways to prepackage foods for easy consumption.

TV dinner meals popped up in a variety of forms -- some more humorous and palatable than others (Is that meat or potato in that compartment?). Inspired by packaged airplane meals, the TV dinner hit markets in the late 1940s. Meals would be processed at factories and purchased at the grocer to store in the freezer at home. They could be heated up by oven (or later, microwave) at the person's convenience. It's contested who invented the dinner TV, but when the company Swanson started marketing its frozen meals in the mid-1950s, the foods' popularity sky-rocketed [source: The Library of Congress].

Regardless of inventor (see "History of TV Dinners" for more details), frozen meals have changed how humans think about and consume food. Recent estimates show these prepackaged frozen foods flourish in a $4.5 billion market [source: Bortner]. TV dinners and today's frozen meals save people time as well as lengthen how long people can store food. During the meals' growth, however, some argued it made TV -- not socializing with family -- the focus of mealtime.

Our next invention brings the funniest and shocking aspects of "real life" into your living room.