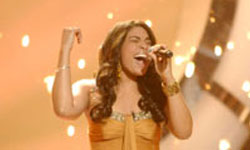 Do you remember Jordin Sparks? Amid all the reality TV stars these days, you might not. Sparks won the sixth season of "American Idol" way back in 2007.
Lester Cohen/WireImage

With reality TV, you never know what ridiculous scene you'll stumble upon by changing the channel. Some shows place the spotlight on people's raw interactions with each other, while others seem so far-fetched that the thought of labeling them as "reality" is laugh-inducing. As one expert puts it, reality TV incites a type of voyeurism for those watching -- much like peering into your neighbor's kitchen or bedroom window without them knowing [source: Slocum].

"Candid Camera," a 1948 show where unknowing people reacted to staged situations on camera, was broadcast as one of the earliest forms of reality TV. Public Broadcasting Service's series "An American Family" popularized applying documentary tactics for mass appeal. Still, we've come a long way from those early reality experiments.

These low-cost projects have now become what many viewers have come to expect from large networks. Where would MTV be without "The Real World" or the fist-pumping pandemonium of "Jersey Shore"? Could we peruse our own home videos without browsing for moments worthy of "America's Funniest Home Videos" to laugh at? The answers probably vary, but ratings and network offerings show that reality TV remains the most popular genre as of 2010 [source: Carter].

Even if you're not a regular reality junkie, who doesn't find some auditions on "American Idol" the tiniest bit funny? After all, the most outrageous attempts for fame may resemble our own musical moments in front of the mirror or in the shower.

Up next: How a piece of underwear changed the world.