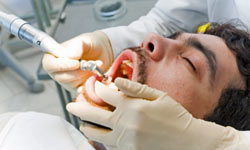 That guy is so relaxed at the dentist that his eyes are closed. Thank you, anesthesia -- and Horace Wells.
Hemera/Thinkstock

Inventions like the light bulb dominate the history books, but we're guessing that anyone facing surgery would nominate anesthesia as their favorite product of the Industrial Revolution. Before its invention, the fix for a given ailment was often far worse than the ailment itself. One of the greatest challenges to pulling a tooth or removing a limb was restraining the patient during the process, and substances like alcohol and opium did little to improve the experience. Today, of course, we can thank anesthesia for the fact that few of us have any recollection of painful surgeries at all.

Nitrous oxide and ether had both been discovered by the early 1800s, but both were seen as intoxicants with little practical use. In fact, traveling shows would have volunteers inhale nitrous oxide -- better known as laughing gas -- in front of live audiences to the amusement of everyone involved. During one of these demonstrations, a young dentist named Horace Wells watched an acquaintance inhale the gas and proceed to injure his leg. When the man returned to his seat, Wells asked if he'd felt any pain during the incident and, upon hearing that he had not, immediately began plans to use the gas during a dental procedure, volunteering himself as the first patient. The following day, Wells had Gardner Colton, the organizer of the traveling show, administer laughing gas in Wells' office. The gas worked perfectly, putting Wells out cold as a colleague extracted his molar [source: Carranza].

The demonstration of ether's suitability as an anesthesia for longer operations soon followed (though exactly who we should credit is still a matter of debate), and surgery has been slightly less dreadful ever since.