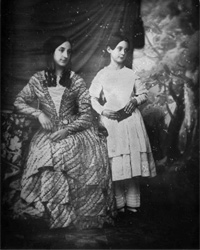 This mother and daughter got decked out in crinoline and ringlets for their 1846 daguerreotype.
Hulton Archive/Getty Images

Numerous world-changing inventions came out of the Industrial Revolution. The camera wasn't one of them. In fact, the camera's predecessor, known as a camera obscura, had been hanging around for centuries, with portable versions coming along in the late 1500s.

Preserving a camera's images, however, was a problem, unless you had the time to trace and paint them. Then along came Nicephore Niepce. In the 1820s, the Frenchman had the idea to expose paper coated in light-sensitive chemicals to the image projected by the camera obscura. Eight hours later, the world had its first photograph [source: Photography.com].

Realizing eight hours was an awfully long time to have to pose for a family portrait, Niepce began working with Louis Daguerre to improve his design, and it was Daguerre who continued Niepce's work after his death in 1833. Daguerre's not-so-cleverly-named daguerreotype generated enthusiasm first in the French parliament and then throughout the world. But while the daguerreotype produced very detailed images, they couldn't be replicated.

A contemporary of Daguerre's, William Henry Fox Talbot, was also working on improving photographic images throughout the 1830s and produced the first negative, through which light could be shined on photographic paper to create the positive image. Advancements like Talbot's came at a rapid pace, and cameras became capable of taking images of moving objects as exposure times dropped. In fact, a photo of a horse taken in 1877 was used to solve a long-standing debate over whether or not all four of a horse's feet left the ground during a full gallop (they did) [source: Photography.com]. So the next time you pull out your smartphone to snap a picture, take a second to think of the centuries of innovation that made that picture possible.