by Jonathan Atteberry
Prev NEXT
1 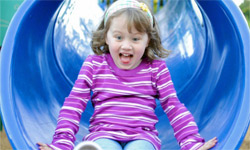 A world without playgrounds wouldn't be quite so much fun.
iStockphoto/Thinkstock

Nearly everyone can think back on their childhood and recall their favorite playground, but that wasn't always the case. Before the women's suffrage movement that began in the late 1800s, public funding for playgrounds was virtually nonexistent in the United States. As the movement gained strength, it brought more attention to children's welfare in the process [source: Johansson]. Before long, playgrounds were popping up in cities across the country, even in poor neighborhoods. Schools soon followed suit, emphasizing recreation and physical fitness more.

Although few would argue that widespread access to playgrounds has been a bad thing, they can be dangerous; more than 200,000 children end up in the emergency room every year due to playground-related accidents [source: CPSC]. The U.S. Consumer Product Safety Commission advocates a number of common sense precautions parents can take to keep such injuries at a minimum, such as supervising children at play and ensuring the playground has a soft surface for children to land on. Still, some experts say that, while playgrounds should never be dangerous, an element of risk can actually help children learn their limits. Just keep that in mind the next time you see kids dangling by one foot from the monkey bars.