When "Mad Max: Fury Road" hit theaters last year, a cavalcade of memorable characters — Imperator Furiosa, Immortan Joe, Nux — immediately claimed their place in the sci-fi canon alongside nominal protagonist Max Rockatansky. But one of the real scene-stealers had no lines, covered his eyeless face in a grotesque mask, wore a red onesie and appeared only a handful of times onscreen for less than a minute total. Given the improbable name Doof Warrior, the character made his mark with the over-the-top theatrics and a flamethrowing guitar.

Now British inventor, home engineer, professional shouter and all-around Internet DIYer Colin Furze has recreated the spectacle, but without all the cinematics. Furze, a plumber by trade who recently built his own working hoverbike, spent the recent weeks fashioning a bass guitar with its own built-in smoke effects and an electric guitar that blasts flames out of the top of its neck.

Wisely choosing an electric guitar over an acoustic guitar, Furze created and then mounted blowtorch heads onto the instrument, built his own manifold to regulate the main flame and pilot flame, and pipes to route fuel to the flame.

This is certainly nothing to try on your own, but Furze clearly knows how flamethrowers work and has mounted one onto the back of a musical instrument. After assembling what can only be described as a metalhead's dream gear, Furze sits in on drums in the trio blasting out heavy metal with these over-the-top instruments, then takes the guitar to shoot out some dramatic flames on a rooftop.

Want to learn more about the process and see how Furze put together this flame-throwing musical monstrosity? Check out his video about the construction: 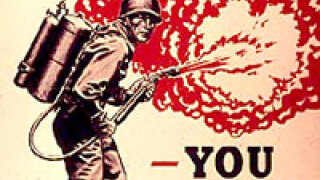 Metalheads Survived the '80s and They're Doing Fine