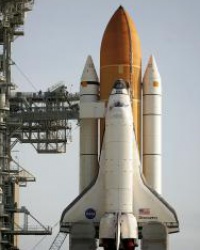 Shuttles left behind an awful lot of cleanup after their glorious departures. NASA came up with at least one solution to that problem.
Marc Serota/Getty Images

After NASA launches a shuttle into space, a slew of fuel and chemical waste remain on the launching pad and surrounding area.

One compound in particular, trichloroethylene, also called "trike," takes a long time to break down naturally in the ground. It's also known to cause health problems, including harmful effects to the nervous system and development [source: EPA].

The situation becomes more alarming when one considers the fact that cleanup wasn't a priority during the heyday of NASA's shuttle program before the mid-1970s [source: Waymer]. In fact, trike waste was placed into the ground, under the assumption the compound would evaporate (it didn't).

But NASA caught on and devised a method to break down the waste. Rather than physically removing it, NASA scientists Jacqueline Quinn and Kathleen Brooks Loftin invented a solution that helps break down trike into nontoxic byproducts with no harm to the environment. They won both the agency's commercial and government invention of the year in 2005.

The thick solution, called emulsified zero-valent iron, can be injected into groundwater, where it neutralizes toxic chemicals that pose a threat to the environment. The technology transitioned easily into commercial markets, with chemical, manufacturing and oil companies purchasing the solution to remediate land contaminated with toxic matter from their businesses. In fact, the solution became so popular, it's the agency's most licensed technology as of 2010 [source: Spinoff Magazine].

Diabetes and NASA paired together in the same sentence? Figure out their relationship on the next page.