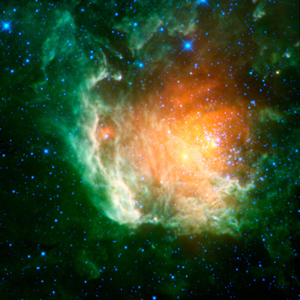 A new infrared image from WISE shows a cosmic rosebud blossoming with new stars. The stars, called the Berkeley 59 cluster, are the blue dots to the right of the image center. They are just a few million years old, young on stellar time scales.
NASA/JPL-Caltech/UCLA

To co-opt a phrase from the fictional Captain James Kirk of "Star Trek," when WISE was launched in 2009 into a polar orbit 326 miles (525 kilometers) above the Earth's surface, it was designed to boldly look where no one had looked before. WISE wasn't the first infrared orbital observatory, but unlike previous probes, it was designed to survey the entire expanse of the sky, looking farther into space to spot faint and/or distant objects [source: NASA].

To accomplish that, WISE relied upon a sophisticated design and state-of-the-art technology. The satellite was equipped with a sensitive telescope and infrared light detectors mounted inside a tank of solid frozen hydrogen — imagine a giant Thermos, and you've basically got the idea — that kept the instruments a frigid -429 degrees Fahrenheit (-256 Celsius). That chilling effect prevented WISE from picking up the heat signature of its own gadgetry, making its observations even more precise [source: NASA].

In the course of its 13 months of work, WISE scanned the sky 1 1/2 times, taking about 1.8 million images that scientists are stitching together to create a composite map of the cosmos [source: Klotz]. Some of the glimpses of previously unseen details of the universe that it provided were astonishing. For example, one snapshot revealed that a vast red and green cloud in deep space was brimming with newly formed stars, just a few million years old, inside flower-like wisps of interstellar dust [source: Space.com].

But WISE wasn't designed to run forever at full capacity. In September 2010, the spacecraft began to run out of the coolant needed to chill its infrared detectors. At that point, scientists shut down two of the four detectors and stopped looking out into the distant reaches of space [source: Chow]. But the orbital observatory's gadgetry worked well enough that it was eminently suitable for another important mission.