Why WISE Is So Important 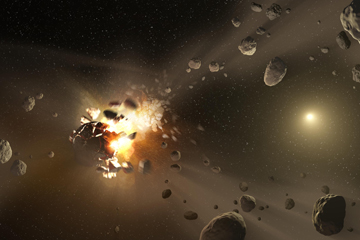 This artist's conception shows how families of asteroids are created. Catastrophic collisions between asteroids located in the belt between Mars and Jupiter have formed families of objects on similar orbits around the sun.
NASA/JPL-Caltech

WISE should be a big help in two important NASA missions: tracking near-Earth objects and devising a way to protect the Earth from them, and staging a manned mission to an asteroid by 2025.

Identifying and tracking asteroids that might venture within the vicinity of Earth is an especially high-priority NASA mission. Its urgency was driven home by the February 2013 explosion of an 18-meter- (60-foot)-across, 11,000 metric-ton (12,125-ton) meteor over the Russian city of Chelyabinsk. That hunk of space rock released nearly 30 times the energy of one of the atomic bombs exploded at the end of World War II, and more than 1,200 people were injured by flying debris [sources: Yeager, Klotz].

Compiling a database of near-Earth objects and tracking their movements hopefully will give NASA advance warning of an object on a collision course — and time to implement a defensive strategy, whether that means diverting the asteroid with gravity tractors, solar sails or other future technologies, or breaking it apart with a nuclear blast [source: Messier].

NASA also envisions using robotic spacecraft to capture a small near-Earth asteroid and redirect it safely to a stable orbit in the vicinity of the Earth and moon. A NASA video depicts one possible method: A robotic probe powered by solar sails could overtake the asteroid, lasso it with cables, and then slip it into a giant "asteroid capture bag," which will enable the craft to control and direct its movements.

Once the asteroid is where NASA wants it, astronauts would fly to it in the Orion spacecraft, a deep-space vehicle that is still under development, and then spacewalk to its surface. They would remove rock samples that would be brought back to Earth for further study [source: Moscowitz, NASA]. Eventually, captured asteroids might be a source of valuable materials such as nickel, platinum and palladium, or even sites for manufacturing [source: Mann].

I'm fascinated with NASA's idea of landing on an asteroid, in part because when I was a kid growing up in the 1960s, I still remember the excitement of seeing a Classics Illustrated comic-book version of Jules Verne's 1877 fantasy novel "Off on a Comet." In Verne's novel, however, astronauts don't land on a comet. Instead, a celestial object called Gallia sideswipes the Earth and scrapes off a bit of the land near Gibraltar, and in the process takes several dozen humans with it on a trip through the solar system. While that premise was entertaining to 19th century readers, of course, in real life such a collision might cause a global catastrophe akin to the one that killed off the dinosaurs. We're much better off following NASA's plan.